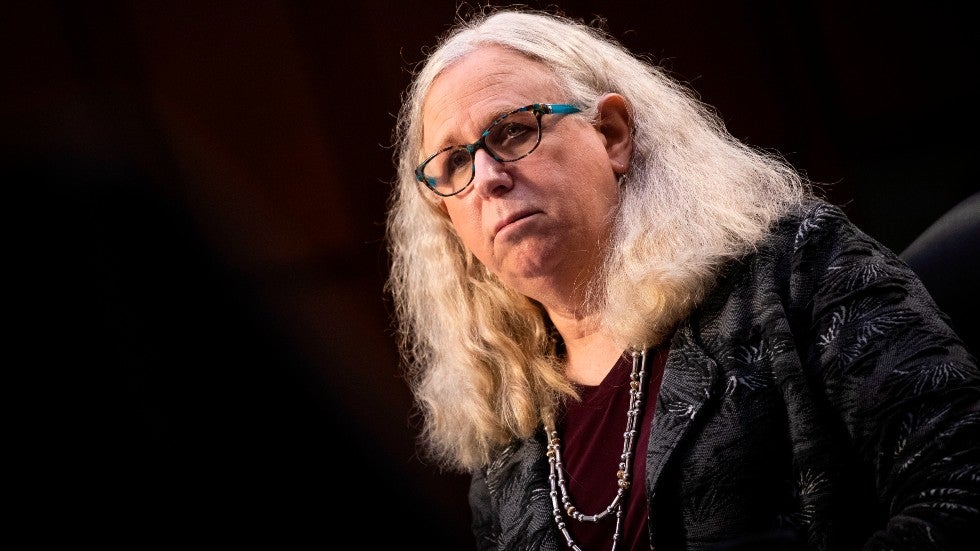 Assistant Health Secretary Rachel Levine said trans youth are being “driven to depths of despair” and committing suicide at alarming rates, during a speech on Saturday about the dangers of anti-trans laws being passed in red states across the country.

Levine, the first openly transgender federal official to be confirmed by the U.S. Senate, said in a speech at Texas Christian University in Fort Worth that LGBTQ youth are being “attacked” and have “few places to turn” for help.

“I want to say this very, very clearly: lesbian, gay, bisexual, transgender and queer Americans are committing suicide at a rate that should shock our conscience,” Levine said during the Out For Health Conference.

“Even after decades of progress, the most vulnerable among us continue to suffer … transgender women of color not only continue to be harassed, but are more likely than the population at large to suffer violence and even murder.”

Her remarks come after new laws criticized as anti-trans were enacted in several states this year, including the controversial “Don’t Say Gay” law in Florida, which prohibits the discussion of gender identity and sexual orientation in public schools from kindergarten through third grade.

Arkansas also passed a law prohibiting gender-affirming treatment for trans youth, and several Republican-led states have similar bills in the pipeline. Texas has ordered the investigation of parents who allow their children to undergo gender-affirming care, which the state’s attorney general said amounts to “child abuse.”

Levine, who was a doctor for decades before becoming Pennsylvania’s secretary of health, argued during her speech on Saturday that gender-affirming care is an established medical practice “based on decades of study” and is both safe and legal.

“Gender-affirming care is medical care. It is mental health care. It is suicide prevention care. It improves quality of life, and it saves lives,” she added.

The assistant health secretary herself has faced anti-trans attacks, including when Texas Attorney General Ken Paxton (R) called Levine “a man” after she was named USA Today’s Woman of the Year. Levine identifies with she/her pronouns.

Levine said while the Biden administration pushing for equality and acceptance, it was becoming increasingly clear that “not everyone feels that way.”

“Many politicians and their supporters are describing our LGBTQI+ community, in public, as a blight on our culture. Many of the targets of this kind of speech are driven to kill themselves,” Levine said. “We know as a medical fact that trans youth in particular are being hounded in public and driven to the depths of despair at an alarming rate.”

In 2020, about 40 percent of LGBTQ children reported contemplating suicide, while 46 percent said they needed some form of counseling, according to The Trevor Project.

Levine told LGBTQ children “it was okay to be you,” and asked parents to support their children who identify with the community, saying “one supportive adult” makes a huge difference in saving their lives.

Blinken, Ukrainian counterpart speak on US aid to Kyiv

Russia says US weapons targeted at airfield near Odesa

She also called on physicians and others in the medical community to take a stand against “slander, bigotry and gender-baiting hate speech.”

“The language of medicine and science is being used to drive people to suicide. The mantle of concern for children is being claimed to destroy children’s lives,” Levine said.

“We have to stand up. We have to take a stand on behalf of those who are being hurt. We have to be doctors. This is what we do, even when it’s difficult.”