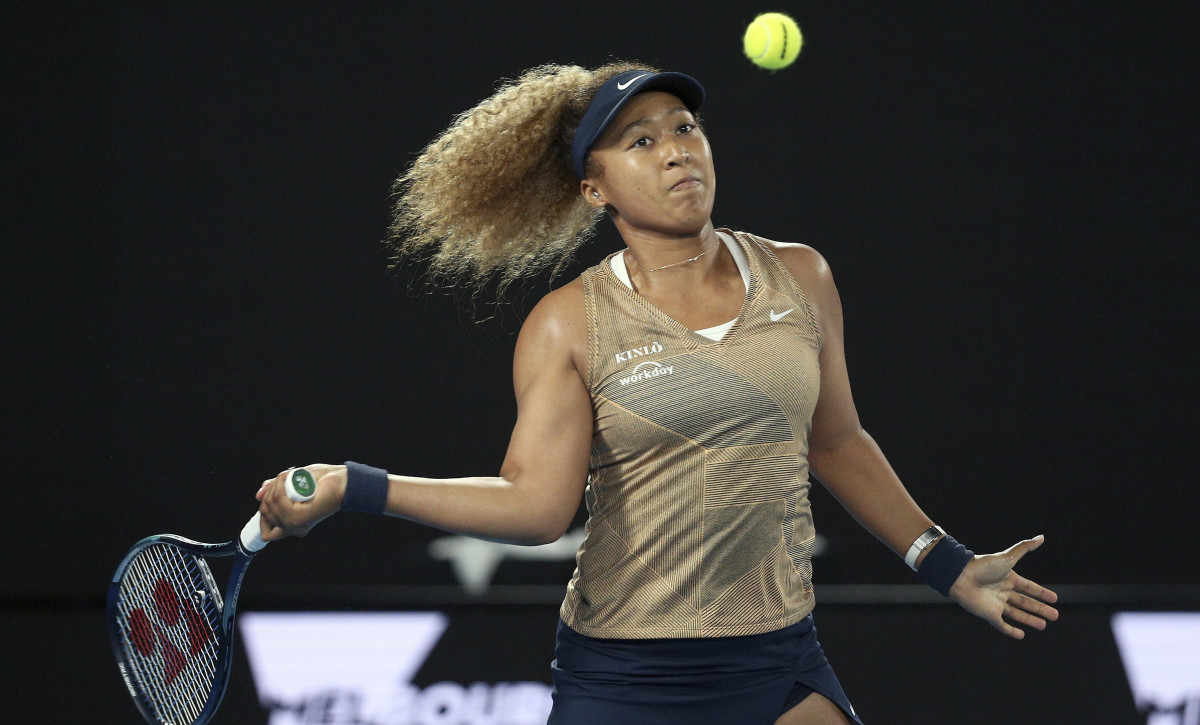 Here’s a column on Osaka. Cliffs notes: I have all sorts of empathy here. But maybe Osaka isn’t cut out for the sports workplace right now. Which is fine. It’s dishonest to turn this into a culture war referendum on softness and entitlement and snowflakery. But it’s also dishonest to portray Saturday’s scene as unbridled heroism and pretend that there’s not something troubling going on here, a mental health issue concern, that still needs addressing—probably away from tennis. Ignoring that serves no one.

Caught up with Venus Williams the other day. Life is good for her.

Keep Andrei Medvedev in your thoughts.

Jon, so far it’s been a good tournament for American men. Give me your top five right now.
—Gwen, PA

• The kneejerk response to these questions is always to drill down. What’s the surface? Are we talking top five now? Or top five long term? Growth stocks or value stocks? But overall I’d say:

To Gwen’s point, “it”—and by “it” we mean the 2022 BNP Paribas Open—has been a strange tournament. Lots of upsets. Djokovic, in absentia, regaining the No.1 ranking. Kyrgios resurgent. A player with a Ukrainian wife beating the Russian No.1…. But another theme has been the emergence of the American men. We talk often of quality-versus-quantity. But I’d add “diversity” to the discussion. Part of what’s so heartening is the variance in style among the members of the group. Jenson Brooksby plays nothing like Reilly Opelka who plays nothing like Tommy Paul. The old scouting report on American men—a serve, a forehand, an exploitable backhand, a tendency to fade—needs an software upgrade. Tennis post-Big Three Era is starting to come into focus. We’re not going to have these titans winning everything, taking titles with predictability, and trifurcating the fans. We’re going to see a flatter landscape, but one still featuring plenty of attractions.

Does buying a ticket to a sporting event buy you the right to say a player you don’t care for “sucks”? Pretty sure the answer, which dates back to the days of the Gladiators, is yes.
—Karl

• You and I might find it….offensive, creepy, lacking in civility, even pathological to yell “you suck” at a total stranger— no matter how rich and famous they are and how well we think we known them. And, yes, there’s a line here on fan behavior. But, like the reader, I think “you suck” lands on the acceptable side.

One angle to this latest Osaka controversy: sports are predicated on passion and unpredictability. You don’t play games on soundstages. This isn’t the ballet or church. The importance of fans’ passion and collective vocal energy and rooting interests (pro and con) was reinforced during Covid.

This foundation—unscripted outcomes, tribal loyalties—is why sports is such a successful sector. The kind of sector that lavishes seven- and eight-figure annual salaries on the stars most adept at hitting balls with sticks. You can’t have it both ways. If you’re asking for full control of the environment, to ban any tension or confrontation or conflict, you’re distorting sports. “Gladiators” might be extreme, but, yes, boos and cheers and warm crowds and hostile crowds are fundamental. If that’s not for you, fine. But if you’ve entered this arena, there’s a certain level of risk assumption here. You don’t get to control the environment.

Should the tours offer protected rankings for mental-health breaks? I think so. I think it’s to the benefit of the sport and players. Whom would it hurt?
—Megan F., Indy

• Sure. And I cannot imagine who would oppose that. In the best of times, this is a brutal sport. Too often we get caught up in the prize money and exotic locations and perceived sexiness of a “circuit.” We don’t see the flight delays and the injuries and the dislocation. We see the champion gleefully hoisting trophies. We don’t much stop to consider that every other entrant heads to the next tournament trying to snap a losing streak. Or the paychecks that stop coming if you’re hurt. Or the FOMO of seeing your peers start families and conventional lives. All these stresses were, of course, intensified during Covid.

For years, sports had this retrograde view about mental health: if you’re hurt, rub dirt on it. Toughen up. Bear down. Play through pain. If it’s not on an x-ray, it’s not real. Player after player—of all ages, rankings and nationalities—have spoken of their mental health challenges. It only stands to reason that the sport would acknowledge mental health as serious by extending protected rankings.

The obvious pushback, I suppose: players could use the guise of mental health to protect rankings. Djokovic, perhaps, might have held his No. 1 ranking if he had applied for the mental health break, while waiting out Covid protocols. Two responses: 1) So what? If a player wants to avail themselves of this protection, better to be overly generous than overly stingy or scrutinizing. 2) Not unlike illegal coaching or retiring down 0-5 or failing to concede you touched the net, or other dubious acts, it’s a caveat emptor. Players make these decisions all the time: how much do I value winning? Is it worth eroding my reputation among fans and colleagues?

Jon I was surprised to see little mention of Varvara Lepchenko and her doping ban. Here is a player who represented the U.S. in the Olympics. Why is no one talking about this?
—Name withheld

• Yes, that has been underplayed. Here’s the decision and release from last week.

Why the lack of attention? Maybe it’s because Lepchenko is 35 and ranked 135. Maybe, it’s because of the various other scandals and hot takes and international incidents besetting the sport these past few weeks. (Aside: Peng Shuai, sadly, seems like the tennis talking point equivalent of a wooden racket.) Lepchenko, you’ll recall, was popped for meldonium at the same time as Maria Sharapova. But unlike Sharapova, she played it close to the vest, never admitted use, and craftily avoided penalty. For her to then commit another, subsequent doping offense is really quite a remarkable double-down. As plain-speaking Rennae Stubbs put it: “Once a cheat, always ….” Might sound a smidge harsh. But it’s hard to argue with that conclusion.

Jon, here is a question I’ve always wondered about: What does a tennis coach earn?
—Thanks, RKO, London

• It really varies. Based on player. Based on circumstances. Based on whether a country’s federation is helping to foot the bill.

First, it’s a given that the players pick up T/E, which can include premium class airfare. The rule of thumb used to be: “I’ll make you whole for what you would have earned teaching at a club or academy.” Now it’s more complex and generally more lucrative for the coach. I know one coach pondering a job from a 50-100 player, who was asking for $3,000 a week. I know another coach was getting $5,000 a week when the player competed and $2,500 on off-weeks. No one is buying Roman Abramovic’s yacht; but that’s good money, especially since you’re paying very little in expenses.

For coaches of stars, that amount goes way up. And, more and more, coaches are getting various bonuses. Famously, a player in the 80s won a Major and gave his coach a $50 bonus. We’ve come a long way since then. It’s not uncommon for a coach to get a six-figure bonus for a Major win. A ranking bonus, etc. I know of one coach who had a sort of “360” deal whereby he took a cut of endorsements and appearance fees as well.

This deal-structuring creativity makes a lot of sense. It incentivizes the coaches and lets them share in the success. It also preserves the relationship. One complaint you hear frequently from coaches, “I got them to point X. Then the money came in and they dumped me.” Some sort of incentive plan helps guard against that.

We’re down at Indian Wells, and thrilled to be. Though like a lot of people, I’m guessing, we are utterly mystified by the AO redux that hijacked the men’s draw here. I understand there are rules that govern what happens when the tournament loses its number 2 seed after the draw is completed, but surely there are winners (Rublev et al) and losers (Millman? Sousa?), and surely the tournament and players (and fans!) would want to prevent this. We don’t want the draw of a tournament to be negatively impacted by something that seemed so avoidable. Tuesday evening after the Eisenhower Cup, we stopped by Stadium 9 and watched the last three games (including tiebreak) of Joao Sousa’s first round qualifying match with Max Purcell. So much drama compressed into 15 minutes, with Sousa saving MPs and playing with his trademark intensity and my-life-is-hanging-in-the-balance style. Sousa was one of the players who was on the edge of qualifying for the main draw if there was an opening. Help us understand how this stupidness could happen again, and are we overreacting about the impacts on the draw? And hasn’t Djokovic again played his hand poorly?
—Thanks, D&S

• Like so many inside—and outside—the sport, we are thoroughly exhausted by this. We would be happy never to discuss rules and mandates and Covid protocol—which, yes, is often conflicting and erratic. Djokovic has already taken up too much oxygen with his stance and its repercussions. At the same time, there’s a professional obligation to acknowledge certain stories and not simply to ignore them because they have become tiresome. And the No.1 player in the world—on the cusp of history—missing events because of an unwillingness to abide by a rule that virtually all others in the sport are following…that remains significant.

As for last week, Djokovic is well within his rights to wait and see if there’s a reversal to the policy he finds so personally objectionable. Once the draw was in the process of being made, he needed to withdraw. Instead, he stuck around and we got the mess that D&S describes. I don’t know how anyone—save the most ardent supporters—doesn’t find this deeply (technical term) uncool.

Have a good week, everyone.