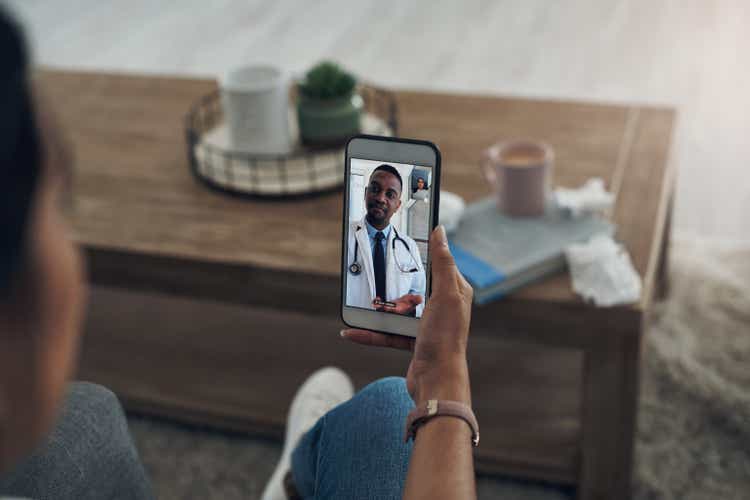 Oscar Health (NASDAQ:OSCR) is an insurance-tech company founded in 2012 after the passage of the Affordable Care Act. It aims to solve the problems created by the complexities and inefficiencies in the health care insurance industry through a user-friendly front-end and powerful algorithms that put the customer first.

Its stock has dropped over 80% since its IPO, for reasons that seem more related to broader market sentiment rather than any company specific reasons. Oscar Health represents a lucrative opportunity for investors due to its low valuation, unique offering of consumer-facing insurance, growth potential from its SaaS business, macroeconomic trends favorable to the company, and consumer-facing brand that separates it from the big health insurance companies.

Oscar is changing the way users interact with insurance. A patient starts by first going to the Oscar platform and engaging with their Care Team, which has 6 experts, including a registered nurse, to help the patient understand what’s covered under the plan. In addition, it where they find doctors and specialists and scheduling appointments and follow ups. Then, Oscar Health provides a good estimate of a patient’s costs before they go to the hospital. Many insurance companies don’t offer this easy access to cost data at all; for companies that do, Oscar’s tool is said to be the most advanced that exists.

Oscar Health analyzes data from previous hospital visits from other users, and is able to identify the best doctor to treat a certain issue (i.e. Oscar’s database will show one doctor as the best doctor for a broken ankle because he has successfully performed this surgery on 100 patients that year). The algorithm also tries to identify the most cost-effective provider to seek treatment. All of this information is calculated in Oscar’s backend and presented to users through their intuitive interface as well as their designated care team.

To further show Oscar’s move towards transparency, look no further than their $3 drug list, where users pay only $3 for the 88 most common generic drugs consumed – ordered on the app and delivered to users. To summarize, Oscar makes healthcare more efficient and transparent through their reliance on big data and a customer friendly experience.

One of the biggest tailwinds for the ACA market is the rise of the gig economy, which compromises individuals who operate as independent contractors. Without an official employer, these workers need to purchase their own insurance instead of being offered insurance from their work. Report says that as many as 55 million Americans are already gig workers. With workers increasingly seeking more flexibility in their work, estimates say that by 2023 half of the US workforce would be engaging in or have tried gig work. With only 594,000 members so far, Oscar has lots of room to grow from these secular tailwinds.

In the current healthcare system, almost 50% of health care insurance is issued by employers. When Americans change jobs every 4.2 years on average and their insurance is tied to their companies, their insurance inevitably changes as well. As a result, the average insurance member’s tenure is only 3 years. However, this presents a problem because it doesn’t give any incentive for the big established insurance companies to optimize their patients’ healthcare for the long-term. These sorts of structural mechanisms create an inefficient market, as seen by the rise of employer insurance premiums that have consistently outpaced the inflation rate.

In addition, this constant switching of insurance companies presents not only inconvenience for patients but also dangers. When patients have to switch insurance plans, they also lose their primary care provider who understands their conditions in depth. Furthermore, it would mean that patients need to personally keep track of their medical history and regimen. In terms of the health insurance companies themselves, not optimizing for long term care could mean cutting back on costs like preventative care – because they don’t see a return on investment for insurance companies in a short time period. With Oscar Health, since people are not forced to change insurance plans when they switch jobs, it can instead optimize for the patient’s long-term health, ultimately leading to healthier patients and improved margins for Oscar (since insurance companies benefit when patients are healthier and require less care).

All of the grievances and dissatisfaction associated with the current health insurance companies is what makes Oscar such a viable candidate to succeed. Although big insurance companies – with the immense capital that they have – are already trying to replicate some of the tech solutions that Oscar has incorporated, Oscar could ultimately pull ahead because of its consumer-focused brand that focuses on a patient’s long term health. For example, Oscar pays members up to a dollar a day for completing their steps, directly incentivizing its users to be more active and healthy. It seems gimmicky, but these initiatives reflect Oscar’s brand of truly looking out for the customer’s long term health. As a result, looking at customer satisfaction, Oscar has an NPS of 40, compared to an health insurer average of 3, according to Forrester Research.

In addition, Oscar has already established itself as an app-based insurance company, meaning most consumers purchase Oscar with the notion that they should be maximizing the use of their software. Meanwhile, it will take longer and more nudge for buyers of traditional health care insurance to switch to their apps and reap the benefits that Oscar health members have. However, I believe although competitive pressures certainly exist, Oscar health can remain a niche health-care provider and still reap impressive revenue–boosting its valuation–due to the sheer size of the market. The growth of the gig economy and the younger generation seeking the transparency and ease-of-use of Oscar provides enough tailwind to significantly boost its revenues.

One of the main selling points of Oscar is that it has been investing heavily into R&D for its platform in the last decade. The technology has been built, now it’s just up to Oscar to successfully cut deals. Oscar launched Oscar+ early last year, which is aimed at selling its software substack to hospitals and other health systems. The end goal of Oscar is not becoming the biggest health insurance in the United States. Rather, it seems content in capturing its share of the market, but expanding its offerings and revenue through Oscar+ to other health insurance systems and hospitals.

Although progress has been slow, the government is incentivizing hospitals to switch from a traditional fee-based model to a value of care model. Previously, hospitals were paid for how many procedures and patients they served, but a value of care approach means that hospitals are compensated for how effective their treatment is. Making this transition requires much more emphasis on looking at patient data, something that Oscar has a built the infrastructure for.

Another reason hospitals want to partner with Oscar is its frontend: the user experience it offers, the virtual visits and care team, transparency with understanding costs, and ease-of-use of finding the right doctors.

Oscar Health’s technology is equally sought after by its competitors. Cigna, one of the biggest health insurance companies in the nation, partnered with Oscar to launch its insurance for small businesses. The partnership utilizes everything that’s available on the Oscar’s platform and connects them with the vast networks that Cigna already has. In their Q4 2021 earnings call, Oscar reports that one of their clients saw a savings of 20% after leveraging Oscar. This partnership shows the strength of Oscar’s proprietary tech and that it’s fundamentally very valuable.

A biggest risk surrounding Oscar is that it’s at the whim of legislation. The creation of Oscar Health itself came only after the enactment of the Affordable Care Act, which created a health insurance Marketplace for users to purchase. Looking at the graph of the Marketplace Enrollment from 2014 to 2021, we can see that the periods where President Trump–a fierce opposer to Obamacare and the affordable care act–was president, the enrollment of the marketplace declined as a result of his policies.

After President Biden assumed the presidency, we saw an immediate rebound in enrollment. Although it’s unlikely the Affordable Care Act will be repealed completely, there is no doubt that future politicians will continue to challenge it; Making Oscar Health’s operations have significant ties to political actions.

Perhaps the most attractive aspect of Oscar Health is its valuation. 2 valuation methods both show that the stock is massively under-valued.

Estimating a $548 billion market in 10 years, based on the current market opportunity of individual, small group, and Medicare Advantage of 450 billion dollars. Capturing just 5% of the overall market will give Oscar $27.4 billion in revenue. Taking the current profit margin from UnitedHealthCare (an established major US health care insurance, the profit margin of Oscar will likely be higher due to its SaaS leaning business model) of 7.6%, gives us $2.08 billion in profits. Using United Health Care’s P/E multiple of 26, the stock price will be $54.08 in 10 years. Discounting it back to today’s value with a 8% discount rate, the intrinsic value is roughly $25. This represents almost a 3.5x increase from its current share price. Although this valuation method has lots of moving parts, I believe it’s quite reasonable given the current trajectory and political climate. The 3.5x increase also provides investors a high risk high reward play for the long-term.

A much simpler way to see how Oscar Health is undervalued is comparing its P/S ratio to the Health Care Select Sector SPDR Fund. With a Price to Sales ratio of 1.85, the ETF is 2.8x more than Oscar’s Price to Sales ratio of 0.65. Oscar’s customer friendly products in a huge industry and economies of scale in its SaaS offerings could propel a much higher valuation than the estimations I have put forth.

From its IPO price, Oscar Health’s price has fallen almost 80%. Looking at Oscar Health’s operations, it seems that this drop was rooted in investor sentiments about tech as well as the macroeconomic environment rather than company specific news. Oscar’s revenue has been growing YoY and Quarter over Quarter. Although they incurred more losses in 2021, management has been stressing profitability in their Q4 2021 call and the company has plans for the company to be profitable in 2023.

I think that our greater scale that we’re seeing in 2022 is going to help us to achieve better cost leverage on our fixed costs and our variable costs going forward. We can negotiate better cost with vendors. We have an opportunity to continue to optimize our operations and the opportunity for even further fixed-cost leverage as we head into next year. So we certainly see opportunities on the cost side beyond just what — what’s available from increasing revenues into the future.”

I believe Oscar Health will truly solve deep systematic problems caused by lack of transparency in the healthcare industry. Macroeconomic factors, people’s desire for ease-of-use healthcare, and Oscar Health’s brand as a consumer-facing insurance company will undoubtedly propel growth. In addition, its SaaS segment seems to serve a real need in the industry that can provide another lever for growth. Investors are likely underestimating the potential growth of Oscar as seen in its low valuation compared to its peers. Competitive risks exist, but they would likely be overcome by Oscar’s brand loyalty. Not to mention, Oscar health only needs to capture a small amount of the market in order to attain a much higher valuation than it does today. The biggest risk that investors take on is the uncertainty surrounding regulation. Although the current political climate doesn’t pose any risk to Oscar’s operations, investors need to be on alert for future changes in legislation.