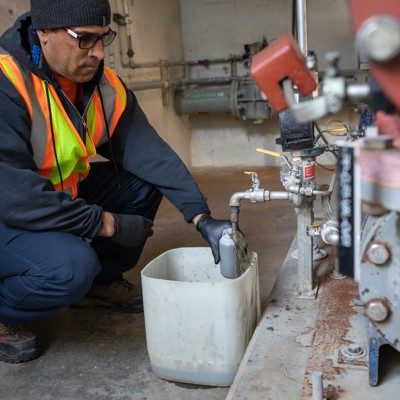 MODESTO, Calif. — One of Patrick Green’s first orders of business each day is to open a tap and fill a bottle with sludge.

A utilities plant operator in Modesto, a city of nearly a quarter-million people in California’s San Joaquin Valley, Green helps keep the city’s sewers flowing and its wastewater treated to acceptable levels of safety. But in recent months, he and his colleagues have added covid-19 sleuthing to their job description.

At the treatment plant where Modesto’s sewer pipes converge, larger items, ranging from not-supposed-to-be-flushed baby wipes to car parts, are filtered out. What remains is ushered into a giant vat, where the solids settle to the bottom. It’s from that 3-feet-deep dark sludge that researchers siphon samples in their search for SARS-CoV-2, the virus that causes covid.

Across the country, academics, private companies, public health departments, and sewage plant operators have been working to hone a new public health tool, one with uses that could reach well beyond covid. Wastewater surveillance is not a new concept, but the scale and scope of the current pandemic have vaulted the technique over the narrow walls of academic research to broader public use as a crucial tool for community-level tracking of covid surges and variants.

Sewage surveillance is proving so useful that many researchers and public health officials say it should become standard practice in tracking infectious diseases, as is already the case in many other countries. But whether that happens — and which communities get access — depends on the nation’s ability to vastly scale up the approach and make it viable in communities rich and poor.

Like many other public health tools, wastewater testing initially took off in big cities and university towns with access to research expertise, equipment, and money. The Modesto project offers a glimpse of the challenges and opportunities involved in making this technology available in communities with more limited resources.

“You should be injecting more resources in places that are underserved since they have the disproportionate burden of disease,” said Colleen Naughton, an engineering professor at the University of California-Merced who is helping set up testing in Merced, Modesto, and surrounding Central Valley farm towns.

William Wong, director of utilities for Modesto, oversees water and sewage operations. Since early in the pandemic, he’s wanted to monitor the city’s sewage for SARS-CoV-2. It’s a natural extension of his work; the safe disposal of excrement is a foundation of both public health and modern society. “We always viewed what we do as protecting the public health,” Wong said.

For covid surveillance, wastewater isn’t subject to the tricky inconsistencies that come with testing for the coronavirus in humans. Covid testing shortages have been a persistent problem throughout the pandemic, stemming both from supply-chain shortfalls and wide variation in local governments’ response. Long delays in test results can leave health officials weeks behind in detecting and monitoring infection trends.

More recently, at-home tests, whose results rarely find their way to public health departments, have proliferated. And for people living in lower-resource communities, there are incentives not to test at all, said Dr. Julie Vaishampayan, the health officer for Stanislaus County, where Modesto is located. A positive test can be a huge problem for people who can’t take time off work or keep their kids out of school.

By contrast, sewage surveillance is an effective and relatively low-budget enterprise, less reliant on human whim. Everyone poops, as the saying goes, and around 80% of Americans deposit their solids into a sewer system.

Dozens of research projects around the country have shown that the method can be used to accurately track covid trends over time. And because people shed covid in their feces before they show symptoms, upticks and drop-offs in neighborhood- and community-level infections can appear in sludge several days before they show up in tests.

Other health issues leave their mark in poop as well. Recent research has found that wastewater surveillance is a reliable method for monitoring flu and the common respiratory illness RSV. The Centers for Disease Control and Prevention told KHN it will soon launch pilot studies to see whether sewage can reveal trends in antibiotic-resistant infections, foodborne illnesses, and candida auris, a fungal infection.

There are places where sewage may not be a great way to keep tabs on covid. That includes communities without sewers; areas with industrial sewage, where treatment techniques can mask the virus; and communities with huge fluctuations in population, such as ski towns.

But where available, the data has already proven powerful. During the winter surge caused by omicron, California, Colorado, New York, and Texas first detected the variant via sewage. Central Valley health officials have said that sewage monitoring has assured them that declines in covid cases are real, and not a distorted reflection of declines in reported testing.

In Modesto, wastewater also revealed that the delta variant remained the dominant strain well into January, weeks after omicron had taken over elsewhere. That was important, Vaishampayan said, because some of the available treatments that don’t work for omicron are effective against delta. Her department told local doctors to keep using the full range of medicines, even after other areas had narrowed their treatment arsenal.

Having academic researchers get the program up and running made the endeavor possible, said Kristynn Sullivan, chief epidemiologist for Merced County, where two testing sites are being set up. “We were interested in it theoretically, but absolutely would not have had the resources to pursue it,” said Sullivan. “What this allowed us to do is step into something that is cutting-edge, that is exciting, with fairly limited involvement.”

For the first time in her public health career, Sullivan said, money is not the department’s limitation. What it lacks most is people: In addition to being short-staffed after years of budget cuts, it’s hard to recruit workers to the area, Sullivan said, a problem shared by rural health departments around the nation.

In a recently published paper, Naughton and colleagues found that urban areas of California are much more likely to have wastewater monitoring than rural communities. Through the surveillance network she is setting up with colleagues at UC-Davis, encompassing eight new Central Valley sites, Naughton hopes to help change that. The collaboration is paid for with funds from state and federal grants, CARES Act money, and philanthropic donations.

Nearly 700 sites in three-quarters of the states are now reporting data to the National Wastewater Surveillance System set up by the CDC, including more than 30 California sites. In many states, however, the data is sparse and sporadic. And experts worry the CDC’s dashboard can be misinterpreted because it reflects percentage changes in virus detection with only limited context.

Still, having that national network will be critical going forward, said health officials, as researchers translate the raw data into usable information and compare trends across regions. But it will take sustained public will and some upgrades to keep it useful, a reality that has kept them from getting too excited about its prospects.

The CDC program is funded through 2025. The Central Valley initiative has one year of funding, though researchers hope to continue the project through at least 2023.

In Modesto, utility workers said they are happy to tap the poop supply for as long as the funding flows. “I love seeing the data used,” said Ben Koehler, water quality control superintendent and chief plant operator for the city. “People want to know that their work has purpose.”

KHN (Kaiser Health News) is a national newsroom that produces in-depth journalism about health issues. Together with Policy Analysis and Polling, KHN is one of the three major operating programs at KFF (Kaiser Family Foundation). KFF is an endowed nonprofit organization providing information on health issues to the nation.