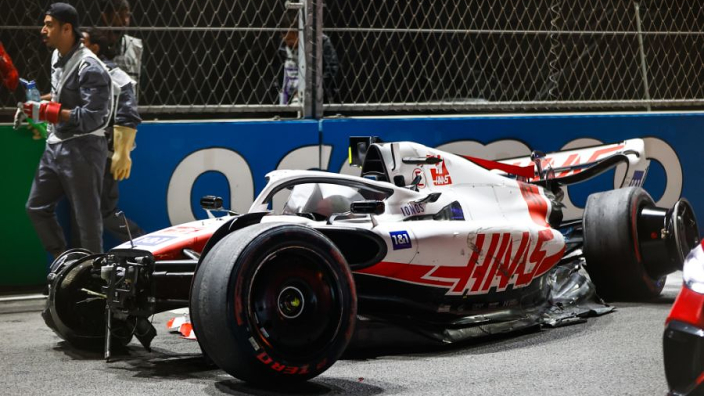 Mick Schumacher has revealed only a lack of components is preventing him from competing in Sunday’s Saudi Arabian Grand Prix as he would have been fit to race.

Schumacher was involved in a horrific high-speed smash into a concrete wall during qualifying that destroyed his Haas, with the VF-22 breaking apart at the rear at one stage as marshals attempted to crane it off the track.

The 23-year-old German was later airlifted to a local hospital but released quickly and returned to his hotel after medical checks gave him the all-clear.

Haas, though, swiftly took the decision to withdraw Schumacher from the race, with team principal Guenther Steiner initially suggesting it was on precautionary health grounds.

But speaking on his return to the F1 paddock ahead of the race, asked if he was physically capable of driving, Schumacher said: “I would be ready to go racing.

“But component management and car parts, in general, we have to look after, otherwise I’d surely be able to race.”

Suggested to Schumacher he knew immediately after his crash it would be tricky to race, he added: “It’s race two, spare parts are usually quite difficult at this time of the year, so I kind of figured it might be difficult.

“But nonetheless, I was still hoping to race.”

In the second session of qualifying, Schumacher struck a kerb at turn 10 that sent him spiralling out of control at 150mph into a wall.

McLaren‘s Lando Norris, for one, has suggested changes need to be made to that part of the track to prevent a repeat, either in the race or for future events at the track.

Schumacher has suggested the current new aerodynamic regulations contributed to his accident, given the ground effect, with the cars now sitting much lower.

Reflecting on what unfolded, Schumacher added: “From what I remember last year it was less of a concern just because of the way the cars were built, with a very high rake, the car up in the air.

“Nowadays, the cars are pretty low at the rear, and especially on this circuit, the moment you do hit this kerb, which is quite high, the rear tyres lose contact to the surface.

“That means there will be a snap of some sort, which we saw from two other drivers in Q3, they had a close moment.

“I think it’s something definitely the people will have to revise and see, to be fixed if we come back here.”