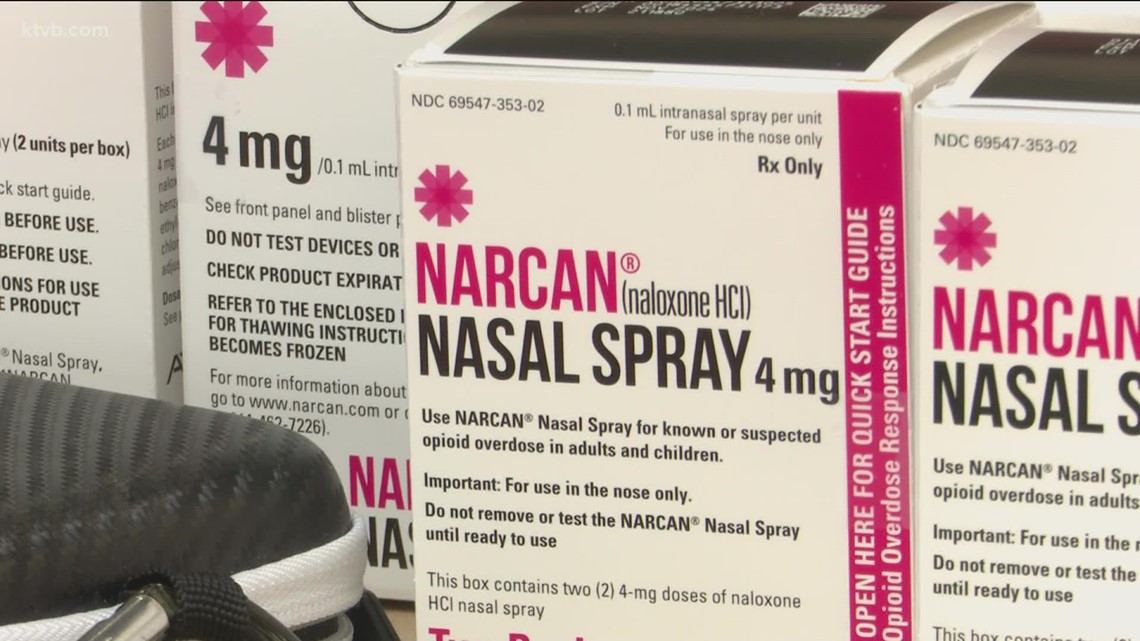 Naloxone (Narcan) is a medication that reverses an opioid overdose. Many agencies around Idaho provide it to people for free.

MOUNTAIN HOME, Idaho — According to the CDC, more than 150 people die every day from overdoses related to synthetic opioids like fentanyl.

Concerns like this are why Idaho leaders said fentanyl is a growing threat in the Gem State. It’s even prompted Gov. Brad Little to create Operation Esto Perpetua, a task force dedicated to stopping the flow of illegal drugs into Idaho.

While the task force gets ready to meet with communities all over the Gem State in the next coming weeks, local health leaders are already getting the ball rolling on how to prevent more opioid overdose deaths.

Central District Health’s Drug Overdose Prevention Program meets with people around  Ada, Boise, Elmore and Valley Counties to focus on overdose prevention and response efforts. The free, hour-long training is instructed by Courtney Boyce, MPH, a health education specialist for Central District Health (CDH) who said the class is designed for everyone.

“It’s improving our community capacity to be able to address these types of emergencies while also empowering family members and friends to know what to do in case something happens,” Boyce said.

Because of how prominent opioid-related overdoses are happening in Idaho, Boyce said knowing what to do in one of those situations could save a life.

“Everyone needs this training because no one knows when an emergency like this could happen,” Boyce said.

Part of this training teaches people about the nasal spray Naloxone (Narcan), which is a medication that reverses an opioid overdose. According to Boyce, an overdose can slow down a person’s breathing and, in some cases, stop it altogether.

“[Naloxone] kicks an opioid off a person’s receptors and takes its place for 30 to 60 minutes,” Boyce said. She added it helps return the victim’s breathing back to normal.

Boyce said many overdose cases are unintentional. Law enforcement and health departments have told KTVB they are seeing fentanyl being repackaged to look like legitimate prescription medication and combined with other drugs, like heroin and meth.

“It only takes a little bit [of fentanyl] to be fatal so they could potentially have an opioid overdose even if that wasn’t their substance of choice,” Boyce said.

Because of this, Boyce said it’s an important lesson and tool everyone should have even if someone doesn’t take medication.

“It’s the same as having a fire extinguisher in your house,” Boyce said. She added that Narcan is so small that people should carry it with them at all times because they never know who they may come across.

“We’re seeing a lot of law enforcement officers carrying it now which is great because we’re seeing more reverses as a result,” Boyce said.

Naloxone is free to everyone through different organizations, like the IDHW and Idaho Harm Reduction Project. Boyce said people can also pick up the medication throughout Idaho pharmacies.

Anyone can also request Boyce to host an Overdose Prevention and Response training for their group or business- Narcan and response kits will be provided.

See the latest news from around the Treasure Valley and the Gem State in our YouTube playlist: