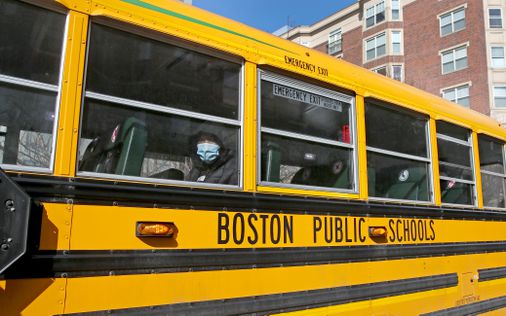 “We are in active planning phases for future surges,” she told the health board. “There’s a definite unpredictability of this virus and we’re specifically establishing surge planning so that we know and are looking for trendsand particularly looking at our leading variables, like viral wastewater and case rates.”

“As we transition to this next phase of living with COVID, we will focus on providing the testing, resources, and planning to keep our communities safe and prepared,” Wu said in a statement.

The school mask mandate could be lifted in a matter of weeks and the recommendation came just four days after the city ended its mask mandate in most other public indoor spaces, such as restaurants, gyms, and entertainment venues.

“This is our current thinking and we will keep you informed as this evolves,” said Dr. Sarimer Sanchez, director of the agency’s Infectious Disease Bureau. “Overall we’re following our metrics very closely on a daily basis and we’re optimistic about where Boston is headed in the coming weeks and how we at BPHC can support our BPS students to engage in the activities that are central to a fun and meaningful school experience.”

She emphasized that students and staff who wish to continue wearing face coverings should feel supported in their decision.

The decision to end the mandate ultimately rests with Boston Schools Superintendent Brenda Cassellius. The school department did not respond to a request for comment.

The Boston school system is one of a dwindling number of districts statewide that currently requires students and staff to wear masks. The school system also has been barring visitors from entering its buildings except for in limited situations, such as last week when US Education Secretary Miguel Cardona visited the Hernandez K-8 School in Roxbury.

Dozens of districts have been dropping mask mandates since Governor Charlie Baker lifted a statewide mandate on face coverings that began Feb. 28 when students from around the state returned from a week-long vacation.

Positive cases reported by schools statewide have fallen sharply in the past few weeks, according to the state education department. Cases totaled 6,723 among staff and students statewide for the reporting period ending on Feb. 9 and fell to 3,084 last week.

The Boston Public Schools also has experienced a dramatic decline in cases. For the reporting period ending March 2, the school system reported 81 cases among students and staff, down from a peak of 1,787 cases for the week ending Jan. 12, according to school department data.

But the school system is grappling with massive disparities in vaccination rates among students. City data indicates that among children between the ages of 5 and 11 citywide, almost three-quarters of white and Asian/Pacific Islander children have received at least one shot, while just 37.3 percent of Latino children have and 29.4 percent of Black children.

The majority of the approximately 49,000 students in the Boston Public Schools are Black or Latino.

One board of health member, Rebecca Gutman, vice president of United Healthcare Workers East, raised concerns about ending the mask mandate, noting that many families and teachers remain concerned about their safety.

The Boston Teachers Union did not respond to a request for comment.

At least one Massachusetts district has run into problems ending its mask mandate.

The Manchester Essex Regional School District, which dropped its mask mandate in most situations on Feb. 28 , is grappling with a growing outbreak of COVID-19 cases at Manchester Memorial Elementary School, which involves at least 24 students. The outbreak comes on the heels of the fifth grade putting on two performances of the musical Golly Gee Whiz at the end of last week.

Some parents worried that the School Committee’s decision last month to end the mandate just as students returned from vacation and would be participating in big school events was premature and urged members to wait.

“It’s a cautionary tale that could inform other districts that are contemplating whether to rescind their mask mandates,” said one Memorial School parent who asked not to be identified.

School officials have acknowledged in letters sent to parents that were obtained by the Globe that 20 of the infected are fifth-graders. The overall number of student cases have quadrupled from eight on Monday to 24 on Wednesday. No staff have reported a diagnosis.

In a letter to families on Wednesday, Superintendent Pam Beaudoin said she could not definitely say whether there was a link between the outbreak and the school play.

“Because we no longer contact trace and rely on self-reporting of COVID cases, we are not able to identify the fifth-grade play as the sole cause of transmission; however, it is natural to assume it may have contributed to the spread,” she wrote.

The mask optional policy remains in effect. Beaudoin encouraged families to mask up but reminded folks “to value each other’s personal choice in this matter.”

In an interview, Beaudoin said the district has been consulting with the local board of health and the state Department of Elementary and Secondary Education.