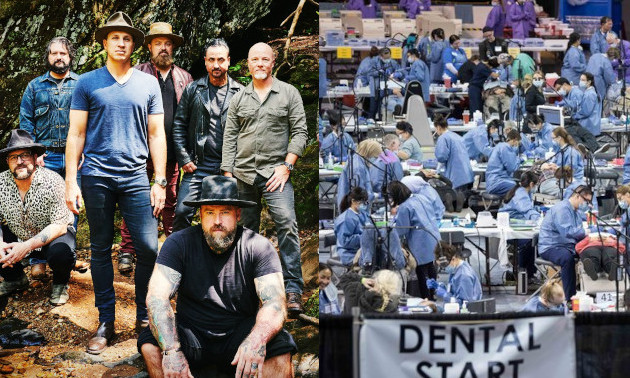 An annual health clinic that serves some 3,000 lower income and uninsured individuals in Washington State and beyond has been postponed for 2022 to facilitate concerts for the Zac Brown Band and The Who. Organizers are especially concerned since large portions of the clinic have not occurred over the previous two years due to the pandemic.

Founded in 2014, the Seattle/King County Clinic held annually at the city’s Key Arena (now called the Climate Pledge Arena) offers free dental, vision, and medical screenings and treatments for individuals who otherwise cannot access these services, regularly drawing individuals from across Washington, as well as Oregon and Idaho, and offering sometimes lifesaving screenings for things like Cancer.

Some of the participants in the medical clinic are homeless, but others are employed and sometimes even insured, but still cannot access or afford all of the services they need. Individuals sometimes line up 24 hours in advance to take advantage of the program. The clinic is staffed by volunteers from the medical profession.

The previously-scheduled window for the clinic in 2022 was during the third week of October, but it has been postponed by the owners of Climate Pledge Arena to facilitate the booking of music concerts over the time period, namely the Zac Brown Band on October 20th, and The Who on October 22nd.

Climate Pledge Arena is owned and operated by the Oak View Group, which took over the property in 2017. Amazon purchased the naming rights for the arena in 2020. It is where Seattle’s NHL and WNBA teams play, and is the previous home of the NBA’s Seattle Supersonics.

As part of the operating agreement with the Seattle Center complex, Oak View agreed they would continue to host the annual clinic. Just as the clinic organizers were targeting the dates in October as the only dates that would work in 2022 due to the amount of medical equipment needed to be rented and other logistical concerns, Oak View Group booked the music concerts, locking the free clinic out, which now may not occur in full until April of 2023.

“In its six years of operation, Seattle/King County Clinic (SKCC) has been able to provide $20 million in dental, vision, medical and social services to 23,000 patients because of valuable support from partners, donors, volunteers and the greater community,” reads a petition set up by Dr. Rick Arnold, who is one of the clinic’s medical directors.

“In this time of great impact on our healthcare system, it is more important than ever that we all meet our obligations to one another,” Dr. Arnold continues. “This includes corporate entities like The Oakview Group, which manages Climate Pledge Arena. Unfortunately The Oakview Group has backed out of the previously agreed upon dates for the Clinic in 2022, choosing instead to book other events in Climate Pledge Arena on those dates.”

The Oak View Group said in a statement that they are committed to bringing back the clinic in the future, including working toward the April 2023 date. “Both OVG and Seattle Center view this as a cherished community resource and understand its importance,” reads a statement. But with the new date being over a year away, and the clinic delayed over the last two years, organizers are concerned that those who rely on the annual clinic will fall through the cracks.

It is unlikely the Zac Brown Band or their booking agents knew of the conflict with the October 2020 date with the annual free health clinic. That is why the call has been put out by the clinic’s organizers to let the greater public know about the scheduling conflict. Due to the pandemic, many venues, performers, and promoters are also scrambling to secure dates and places to make up for lost time over the past two years, including some who’ve been holding over purchased tickets since early 2020. But Zac Brown Band may be able to reschedule to a different date, while the complex logistics of the health clinic means it can’t.

“For an organization that portrays themselves as community minded, this was not a community-oriented act,” Dr. Arnold tells Crosscut. “I want Oak View Group to be better partners going forward, to treat us like any other rock band and honor the commitments they make, particularly to those folks who don’t have a voice.”