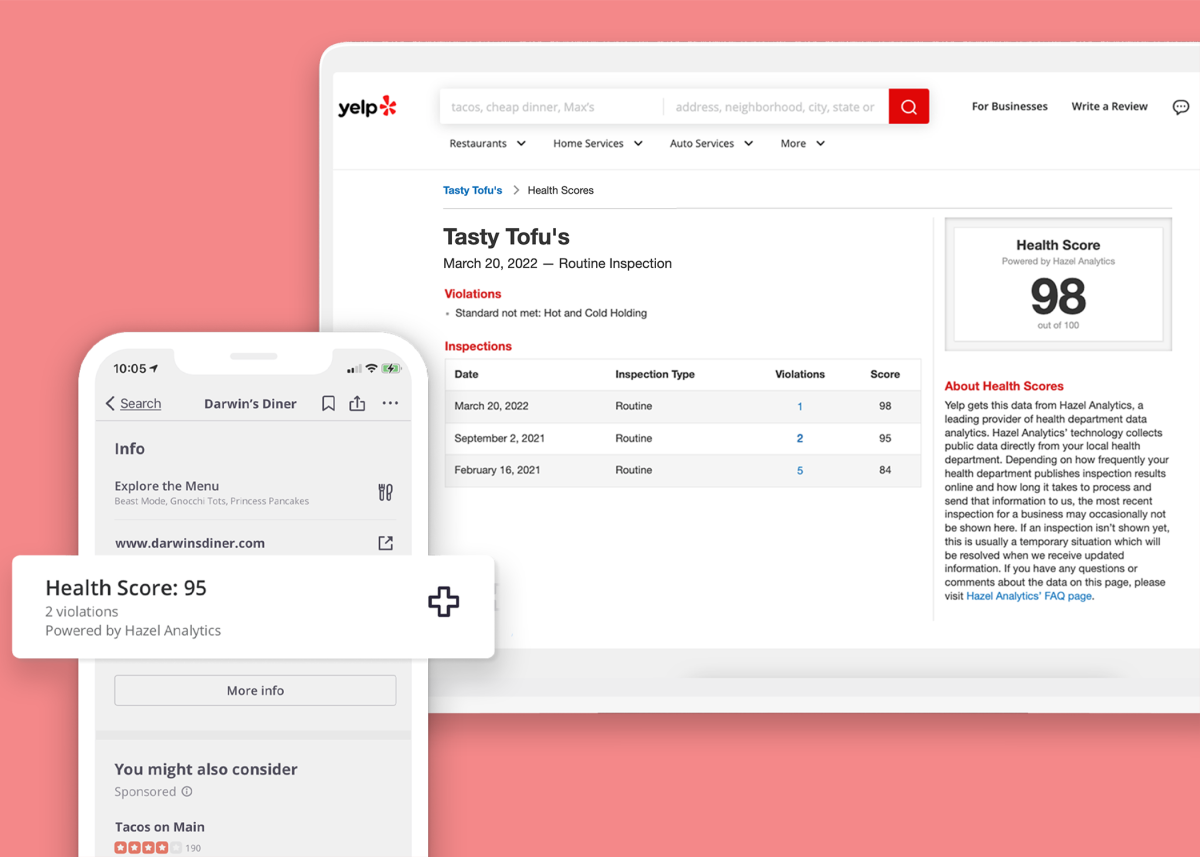 Yelp today announced it would further expand its health grades information on restaurant listings. While the reviews platform developed its own digital standard for restaurant hygiene (called “Local Inspector Value-entry Specification” or ) the “the technology departments of the cities of San Francisco and New York” in 2013, it’s now broadening its partnership with firm Hazel Analytics. Yelp and Hazel teamed up last year, and together the LIVES metric now incorporates “data from health departments across 48 U.S. states” as well as Toronto and Vancouver.

“The expansion of Yelp’s health scores program comes at a time when people are returning to indoor dining as COVID-19 restrictions continue to lift, health inspections are restarting from the early pandemic pause, and restaurants are embracing more diner safety measures like contactless payments and virtual menus,” wrote Yelp in a blog post.

There’s a chance you’ve seen health scores on your city’s Yelp restaurant pages already. But in recent years, Yelp became even more proactive in grading restaurants, going so far as to estimate scores in cases where a city might not issue a letter grade or numerical score. Yelp listings for restaurants in Los Angeles and Chicago also include a rundown of .

Still, some in the restaurant industry have criticized Yelp’s efforts. Cities and states vary widely in their food inspection scoring, with some assigning a letter grade or numerical score, and others opting for a pass/fail system. Restaurants have complained about inaccurate or out-of-date scores on their listings. The Mercury News that restaurants in Bay Area counties that use a pass/fail system were taken aback when Yelp’s algorithm generated its own health inspection score for their businesses.

Yelp calculates health inspection scores using three methods: directly using a score provided by a city’s health department, generating a score from raw health data or using an estimated health score generated by Hazel’s algorithm. The third option — which Hazel defaults to in cases where cities don’t publish health inspection scores — leaves a great deal of room for misinterpretation. And as The Mercury News points out, restaurants that, deservedly or not, show low LIVES-generated scores on Yelp might see their business dry up significantly.