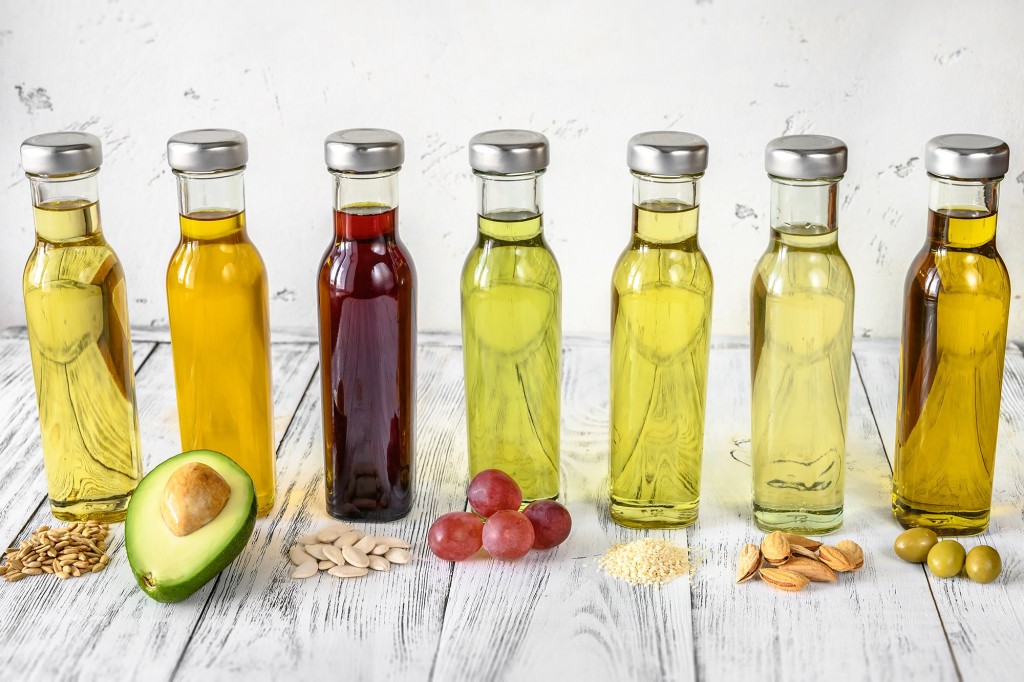 Next time you cook up a storm or scan an ingredient list, steer clear of these bad-for-you oils.

“Chronic, low-grade inflammation is the root cause of many diseases common to Western society. This inflammation is the result of, in part, an imbalance in omega-3 and omega-6 fatty acids,” said Trista K. Best, registered dietitian, Balance One Supplements. “Both are essential fatty acids, but omega-6 is highly inflammatory when it outnumbers omega-3’s and it is consumed in large amounts in the standard American diet.”

When you can, reach for nutrient-dense olive oil, which research shows can cut the risk of disease, and even help you live longer. In fact, olive oil is one of the healthiest foods for your heart and loaded with antioxidants and vitamins.

For salad dressings, we love extra virgin olive oil. While cooking, EVOO or regular olive oil is an excellent choice, as is a bit of ghee (clarified butter) or butter. Read below on which cooking oils to eliminate from your diet.

One oil in particular that has created this imbalance in omega-3 and omega-6 fatty acids is corn oil, said Best.

“This oil is relatively cheap and has a high smoke point. This makes corn oil a popular option for frying foods,” said Best. “Corn oil is 57 percent omega-6 and 29 percent omega-3 fatty acids, with saturated and omega-9 fats making up the rest.”

Jay Cowin, registered nutritionist and director of formulations for ASYSTEM, also noted that corn oil is not as healthy as people may think.

“It’s full of polyunsaturated fatty acids like Omega-6, which can cause inflammation and liver damage,” he said.

“When buying cooking oils, it’s important to know and understand that we need a balance of Omega 3 and 6 fats in our diet; so consuming disproportionate amounts of either one can imbalance the system,” he added, echoing Best.

Soybean oil is another cooking oil you may want to limit.

“Like many vegetable oils, soybean oil is highly refined. This means it goes through an extensive process involving numerous chemicals to extract it from corn and make it into oil,” said Cowin. “This production process makes soybean oil more prone to becoming oxidized — and when we have a lot of oxidized compounds in our body, we put ourselves at risk for multiple diseases.”

“Sunflower oil is unhealthy because it also contains high levels of Omega-6 fatty acids,” said Cowin. “These fatty acids can cause inflammation in the body, which can lead to health problems such as heart disease and cancer,” Cowin continued, pointing to 2017 research from the journal, Healthcare.

“Another reason why sunflower oil can be unhealthy is that it produces higher levels of aldehyde [per 2017 research in the Journal of Hazardous Materials], as compared to other plant-based cooking oils, when exposed to heat. Aldehydes are actually toxic substances that can make someone vulnerable to multiple health risks,” he said, pointing to 2017 research in Chemical Research in Toxicology.

It may have a health halo around it, but coconut oil may not live up to the hype.

“Coconut oil is abundant in medium-chain fatty acids, which are more difficult for the body to convert into stored lipids,” said Michael Garrico, personal fitness trainer and nutritionist, who is founder of totalshape.com. “According to a study published in the journal Circulation in January 2020, coconut oil may enhance your LDL cholesterol levels, which is bad news for your heart.”

Garrico said that partly hydrogenated oil can be found in processed foods and is the principal source of dangerous trans fats in a person’s diet, crediting the American Heart Association (AHA).

“These synthetic trans fats are made in an industrial procedure that involves adding hydrogen to liquid vegetable oils in order to solidify them,” he added.

Trans fats raise your LDL (or “bad”) cholesterol levels and lower your HDL (or “good”) levels and increase your risk of developing heart disease and stroke, per the AHA.

“According to study, palm oil has nearly equal amounts of saturated and unsaturated fat,” he said. “There are also ethical problems about the situation,” he said, referencing the ingredient’s link to destroying rainforests.

Other mixed and straight vegetable oils

Ava Rockwell, founder of the School of Holistic Medicine, commented that any mixed vegetable oils or straight vegetable oils, such as corn, canola or soybean, are terrible for you.

“They cause awful inflammation and are implicated by a famous, now-retired heart surgeon who has 1,000 bypasses under his belt. He claims that sugar and refined vegetable oils are the real cause of heart disease,” she said. “They damage the arterial walls, leading to injury, causing the body to create layers of deposits to repair the damage.”

On that note, pass the EVOO, please.