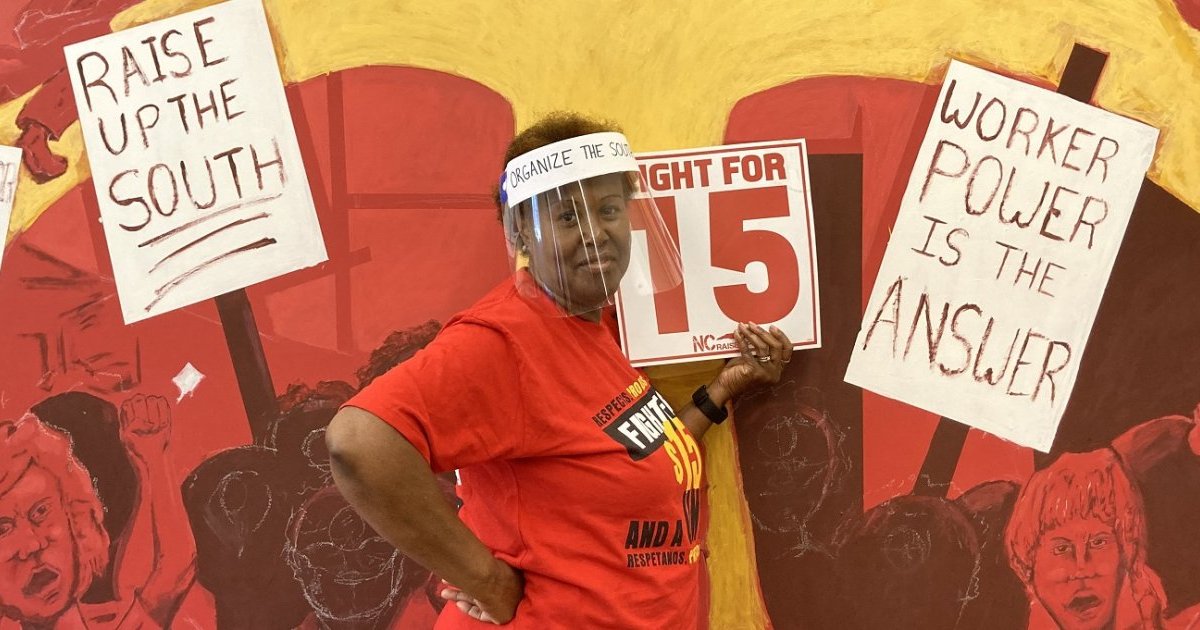 Sandra JW Brown has been a home healthcare worker in Asheville, North Carolina for a little over a year, but she’s worked in healthcare since 1993. In that time, she’s worked as a certified nursing assistant in nursing homes, in hospitals, in a doctor’s office, and in behavioural health. Yet with all her experience, she is still paid just US$10 an hour.

“This is the first healthcare job I’ve had that offered no benefits at all,” Brown says. “The pay is what I was making 15 years ago, 20 years ago.” And like many workers in the United States, she isn’t offered health insurance. “So you’re out there providing healthcare and you get no healthcare or safety net in return. Does that make sense?”

Brown is just one of millions of low-paid care workers across America, watching policy debates and organising with workers like herself to change the circumstances under which they labour: mostly alone in their clients’ homes, providing medication and physical and emotional support, and all at rock-bottom pay rates. With the shift to a new administration in Washington and the outbreak of the Covid-19 pandemic, care work is newly in the spotlight, but it’s unclear whether the workers will actually see an improvement in their working conditions anytime soon.

Brown began working in home care after her husband was diagnosed with terminal cancer. A friend of hers had been approved for home health services – paid through Medicaid, the public care system for low-income people and those with disabilities – and that friend asked Brown if she would be his carer. The job allowed her to be flexible enough to take care of her husband, and to care for her two daughters after her husband passed away. She’s since begun to pick up other care work to supplement her income, but none of the work provides benefits.

Cummie Davis has also been working in care for decades, beginning in a nursing care facility and then moving to home care when her mother became ill. She’s now been doing in-home care in Chapel Hill, North Carolina for over 13 years, but her wages remain stagnant.

“They’re not giving any incentive for you to want to stay on the job. Looking back at it, the reason why I’m still there is basically because I still have bills rolling around every month that I need to pay.”

For her home care job, which she does on top of another position at an assisted living home, she stays overnight with her client, yet is not paid for the time between 10pm to 6am. “I feel like they should pay us for sleeping there and not being in our own bed at night,” she says, even if it’s not the same as her regular hourly rate – which is just US$11 an hour.

There are many ways, both Davis and Brown point out, that the short-changing of home care workers also affects the clients. The lack of personal protective equipment during the pandemic – something both Davis and Brown experienced, in different parts of the state and with different employers – put both workers and clients at risk. When Brown had to take time off to have surgery, she asked the agency if they had someone to cover her client’s needs. The response? “We have clients that go without care all the time in that area.” The client’s friends wound up stepping in, and then Brown herself returned to work early, before she was medically cleared, to make sure that her client had the care that he needed.

Both women are frustrated with the contrast between the essential nature of their work – something stressed over and over again during the pandemic, where nursing homes became hotspots for the virus and in-home care even more necessary – and their low pay and ill treatment. “If we’re not seeing it on our pay cheque, show me that I’m an essential worker,” says Davis. “Looking at why we have been underpaid, I think that it’s because of racism. And I think that that causes people to undervalue caregivers.”

Almost 90 per cent of home healthcare workers are women

Workers like Davis and Brown are at the centre of a massive, ongoing public policy debate in the halls of Congress. US President Joe Biden initially proposed a massive investment into home care, which would have increased access to care (which would create jobs) and raised wages for caregivers, but the details are still being hammered out between conservative Democrats – no Republicans are willing to support the measure, though some pay lip service to the need for home care – and the president and more progressive members of the House and Senate.

In the American Jobs Plan, Biden had US$400 billion earmarked for home care services, but that was cut back after complaints from conservative Democrats like Joe Manchin of West Virginia and Kyrsten Sinema of Arizona. Talks continue, and Biden has recently signalled his commitment to home care funding, but there is no timeline for such a bill to pass and advocates note that the reduced amount – US$150 billion – is nowhere near what is necessary.

The home care money had originally been in Biden’s infrastructure bill, which passed the Senate with bipartisan support, but Republicans argued that home care wasn’t infrastructure.

However, economist Kate Bahn of the Center for Equitable Growth in Washington, DC points out that care work, like much work associated with women’s historic role in the home, is paid less because of bias. “It does not reflect the economic value of these jobs.”

The home care workforce, she notes, is a very large, fast-growing one. It doubled in size between 2008 and 2018, and was estimated as the fastest-growing occupation in the US before the Covid-19 pandemic heightened the need for workers like Davis and Brown. Some 87 per cent of home health workers are women, and most of them are women of colour like Davis. Immigrants make up 31 per cent of the home care force. “It is a sector that was specifically hard hit in the pandemic, so supporting that sector is a really good, targeted way of addressing the fact that Black and Latina women lost the greatest amount of jobs in the pandemic,” says Bahn.

She also noted that job quality and health and safety goals are directly linked in work such as this. “Job tenure and job quality has a direct link with safety. People are better at these jobs when they can do them longer and particularly within the exact same position, and people are much more likely to stay in jobs when they are higher paid and better-quality jobs.”

But with care work, Bahn says, the market simply doesn’t provide: “The folks that need it the most are the folks who are least able to pay for it.” In the US, home care is not uniformly public or private, but a mashup of both; a combination of private hire and reimbursement through Medicare (for the elderly) and Medicaid (for those below a certain income threshold). Both of those programmes are state-based, meaning that quality varies widely. A recent study ranked North Carolina, where Davis and Brown work, the worst state for workers in the whole country. To fix this problem, Bahn argues, public provision is necessary, and better quality public provision, that improves wages and benefits for workers around the country.

Such an investment, she says, would be “one of the most important economic development things we can do because it would increase jobs and wages for a really low-paid workforce that has been hit hardest in the pandemic, which then frees up the space for other families to engage in the economy how they want to”.

Davis isn’t waiting around for Congress to make up its mind, though. “Talk is cheap. What we need is to see action on it,” she says. “It’s just really hard to get off this poverty line. We are not being valued for the work that we do.”

Davis and Brown are both part of NC Raise Up, an organisation backed by the Service Employees International Union as part of its Fight for $15 campaign, which began with fast food workers in 2012 and has since spread to many low-wage sectors. Davis recalls the first rally she joined: “It was just so vibrant. It was powerful, to see us protest together. It was the best thing I could have done. Whenever you’re able to speak to someone that’s going through the same thing you’re going through, it makes you feel better to know that you’re not going through the struggle alone.”

Davis has had a union job before, and the benefits there, compared to her home care work now, were much better. But many North Carolina workers are unaware that unionising is even a possibility in their state.

When Brown heard about a union drive at a local hospital, it surprised – and inspired – her to get involved with organising herself. Since then, she’s joined Raise Up’s Western North Carolina Care Worker Team and been part of town hall meetings and days of action. She’s also helped to gather signatures on a petition and statement authored by North Carolina healthcare workers, calling for safer working conditions, wage and benefit increases, and the passage of Biden’s proposed US$400 billion plan for care workers.

Brown and Davis hope that their organising, alongside other workers who kept the state running during the pandemic, will change the way their work is perceived – and how it’s paid. “We encompass food services, industry, hospitality – all low-wage work, basically – and grocery stores,” Brown says. “All the jobs that people have been calling essential or heroic, yet here we are with nothing and no protections at all.”

Davis concludes: “Society has gotten away from looking at the services that caregivers provide to help someone sustain their daily living. They feel like it’s okay to just pay us US$10 when we should be getting paid well over US$15 an hour. But US$15 an hour is a great start.”