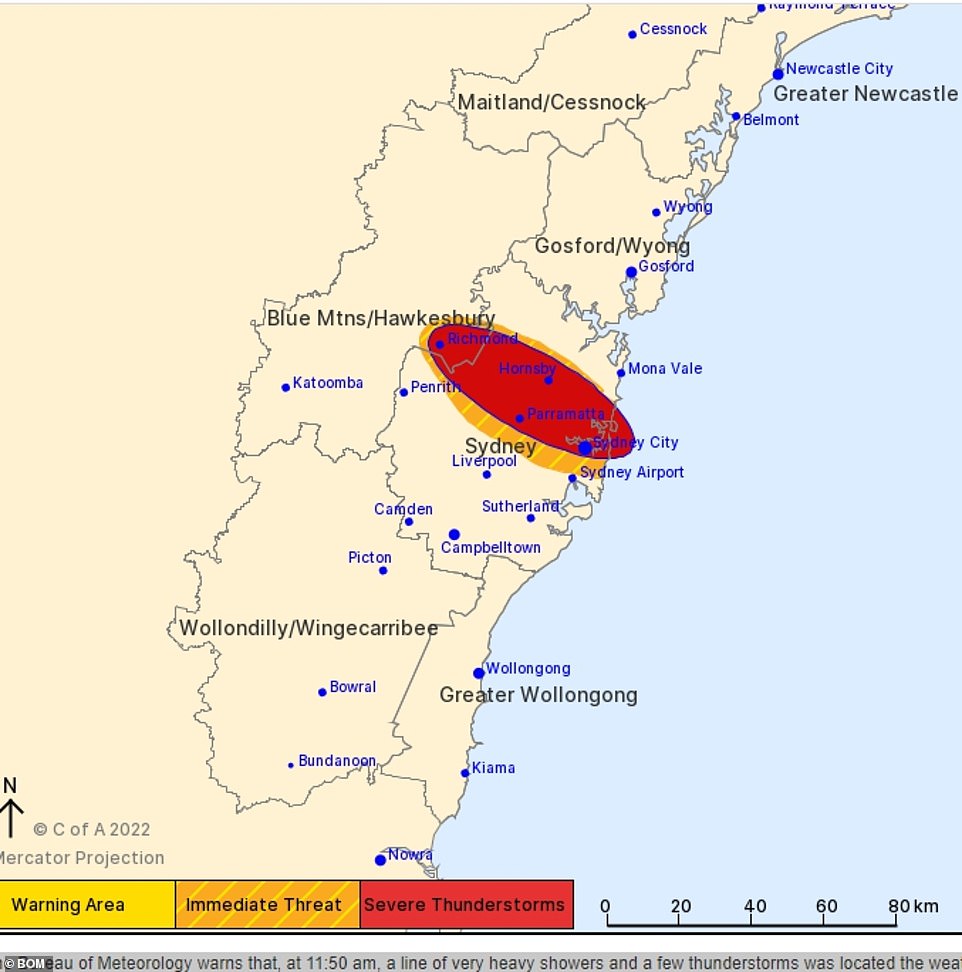 Millions of Sydneysiders have been warned to unplug all their appliances and computers and stay off the phone as a massive storm sweeps through dumping torrential rain and sparking flash flooding.

The Bureau of Meteorology issued the extreme advice about 12pm on Monday for everyone between the northern beaches and Richmond including the central city, Parramatta, and Hornsby.

Alerts advised anyone in the storm’s path to keep clear of creeks and storm drains and not to walk, ride their bike, or drive through floodwater – which has already killed two people in western Sydney.

If they are trapped by flash flooding, they should seek refuge at the highest available place and ring 000 they you need rescue. 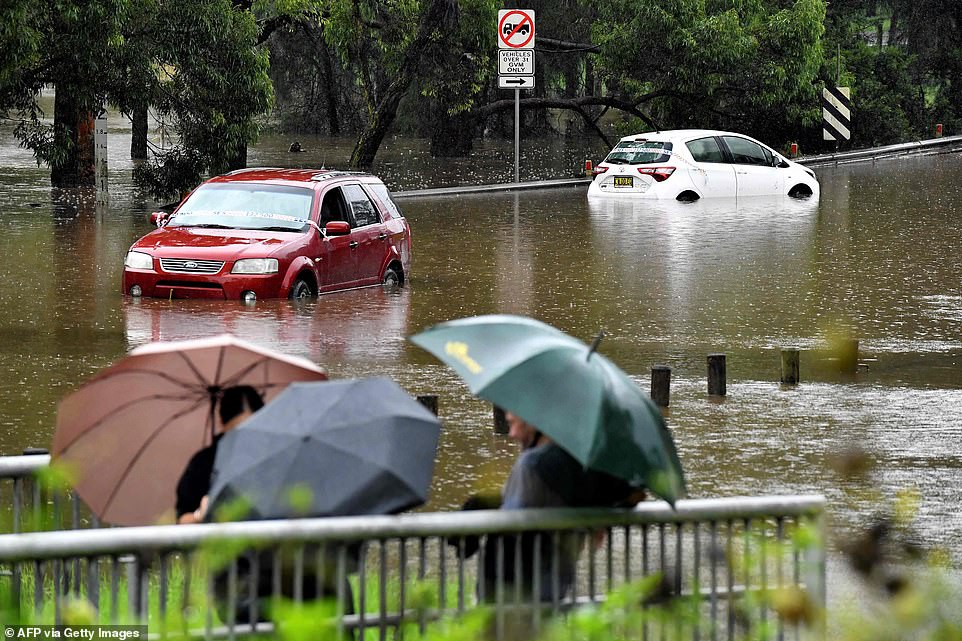 Surprising advice included to unplug computers and appliances, and avoid using the phone during the storm. It was not clear whether this was just for flooded areas or as a precaution for the entire area.

Strictly following the advice would paralyze much of the city with thousands of staff working from home due to flooded roads and severe transport delays.

BoM also advised residents to stay indoors away from windows, and keep children and pets inside.

‘A line of very heavy showers and a few thunderstorms was located the weather radar extending from the coast around Sydney through Hornsby, Parramatta to Richmond,’ it said.

‘Very heavy rainfall that may lead to flash flooding is likely to continue.’

SES has advised people in affected areas to keep clear of floodwater and stay indoors.

At least 150mm of rain is forecast to fall across Sydney on Tuesday alone and residents in the city’s south and south-east have been ordered to evacuate.

The Sydney floods turned deadly on Tuesday when two bodies were discovered near a car abandoned in a storm canal in Sydney’s west.

The bodies are yet to be identified but sources believe them to be those of missing mother Hemalathasolhyr Satchithanantham and her 34-year-old son Bramoothand.

The Bureau of Meteorology’s Dean Narramore warned that millions of Sydney residents should brace for a ‘tough’ few days. 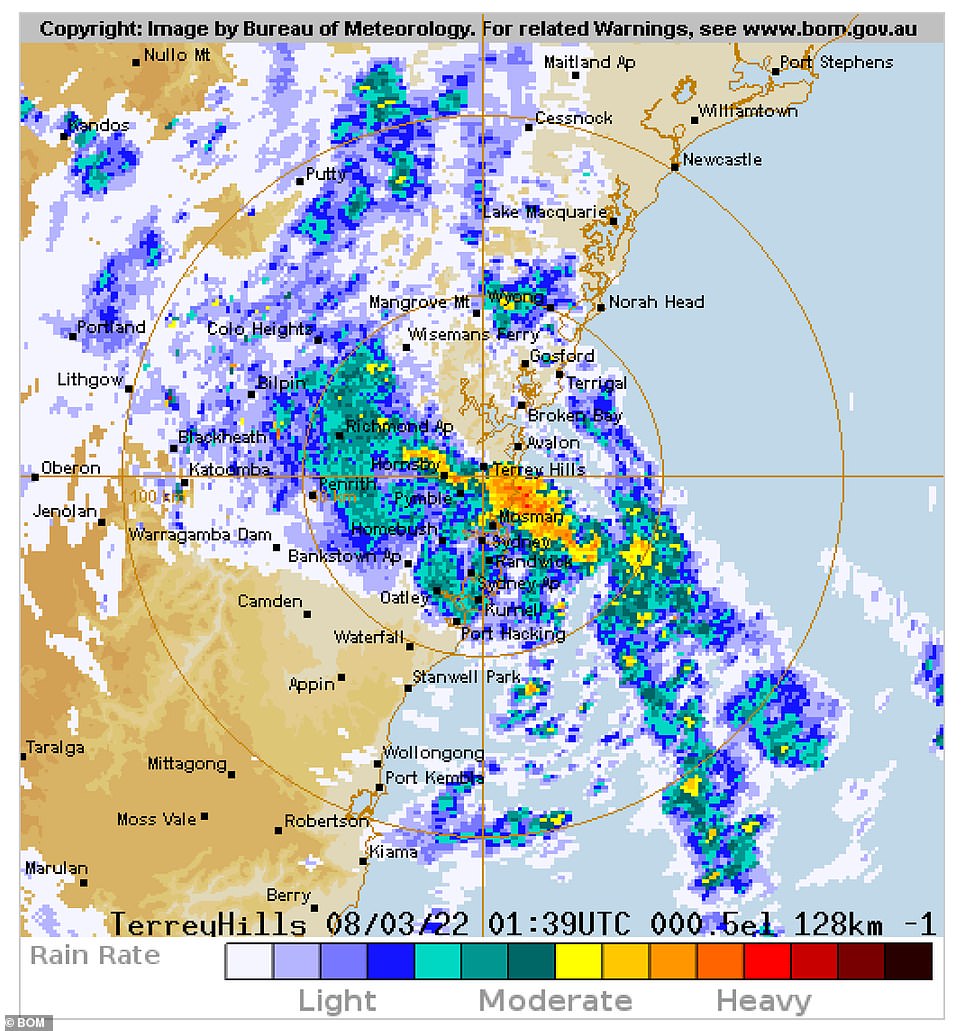 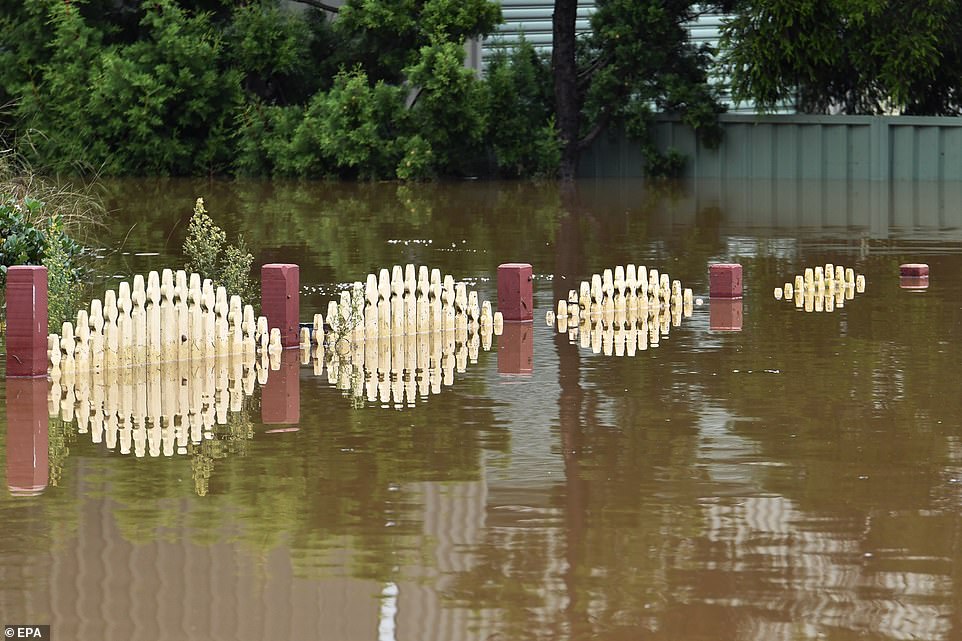 ‘(There’s a) tough 24 hours or even 48 hours ahead,’ he said. ‘Even if the rain does stop on Wednesday and Thursday, which it will, there’s still a lot of water in these rivers,’ he said.

Mr Narramore said the amount of rainfall is already greater than last week’s ‘rain bomb’ and warned flooding is expected from Queensland to the Victoria border.

‘If you remain in the area you may be trapped without power, water and other essential services and it may be too dangerous to rescue you,’ it said.

‘Strong winds are expected which could cause trees and powerlines to fall. Landslides are also possible, which could block roads.’

Residents on 10 low-lying streets in Sussex Inlet have been ordered to evacuate by 12pm on Tuesday as floodwaters rise in the St Georges basin.

The NSW State Emergency Service has also issued urgent evacuation orders for a number of suburbs including Chipping Norton, Georges Hall, and parts of Holsworthy, Lansvale and Milperra.

Sydney residents have been warned to avoid all non-essential travel and video footage shows cars driving through ankle-deep water along the city’s M5.

At least 20 major roads were closed due to heavy rain and floodwater on Monday night, including the tunnel between between Mascot and Beverley Hills.

The Bureau of Meteorology urged motorists to drive with care as the rain had created dangerous road conditions.

‘Slippery and flooded roads and reduced visibility in heavy rain will make driving conditions dangerous during Tuesday in all suburbs,’ it wrote. ‘Motorists are advised to take extreme care.’

‘Due to severe weather conditions, expect delays and potential cancellations on Sydney Trains and NSW TrainLink Intercity and Regional train services and buses in affected areas. Unprecedented rainfall is impacting the transport network,’ it said.

Ferry services were also disrupted due to heavy swells created by the wild weather.

In a bid to ease congestion around the city, Transport for NSW have opened the T2 and T3 transit lanes for general use until midnight on Friday.

The Blue Mountains train line was closed on Monday after the incessant deluge caused a damaging landslide.

On Monday night services were replaced by a series of buses from Penrith station to Blue Mountains stops.

Emergency Service Commissioner Carlene York said there were about 60,000 people impacted by floods warnings and about 800 people relying on emergency accommodation after areas between Sydney and Ulladulla on the South Coast have received 100mm to 200mm of rain since 9am on Monday.