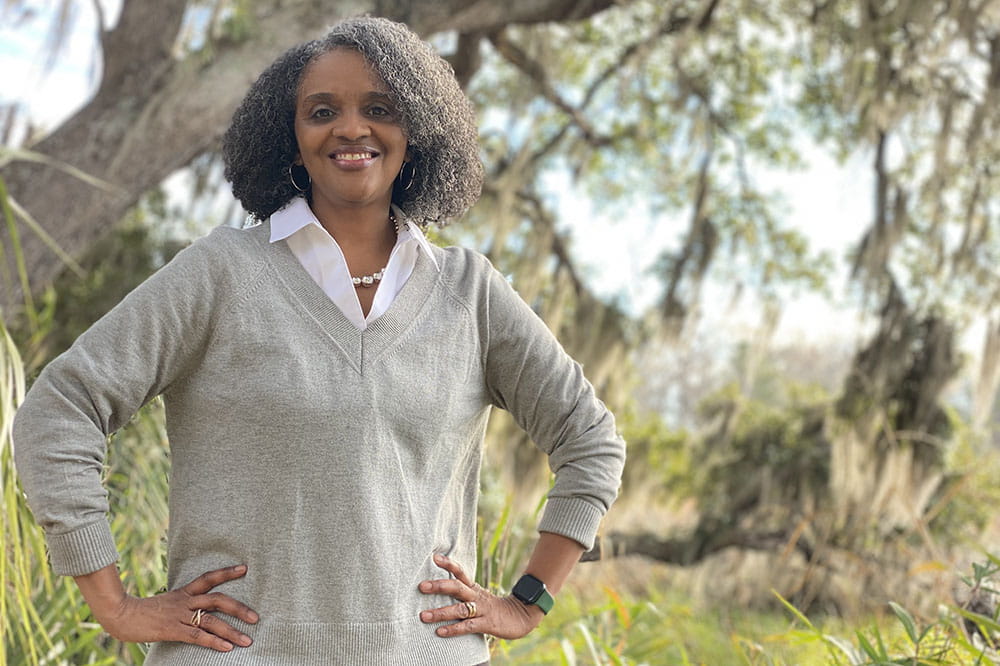 If you don’t know the signs and symptoms of multiple myeloma, you’re a part of Tiffany William’s mission in life. And Williams is a force to be reckoned with.

In 2013, Tiffany Williams led an exciting, busy life. She loved her work as both a pediatric nurse practitioner and an assistant professor in the Medical University of South Carolina’s College of Nursing. She enjoyed volunteering in her community and church and raising a family.

Then everything shifted. That fall, she started experiencing terrible back pain and battling intense fatigue. Her pain felt similar to what she’d experienced years earlier when she was diagnosed with a lumbar disc herniation, and the fatigue was easily explained away by her hectic lifestyle, so she wasn’t too worried. To err on the safe side, she saw a doctor, who discovered she was anemic. This explained her fatigue, so he did not run any more tests. Williams went back to her day-to-day routine with no reason to believe anything else was wrong.

When the pain increased, she visited the doctor who performed her lumber discectomy years earlier. A scan of her lower body showed osteolytic lesions in her spine. That’s when Williams decided to return to MUSC. She was seen by neurosurgeon Bruce Frankel, M.D., for a bone marrow aspiration and biopsy, which confirmed a diagnosis of multiple myeloma.

“MUSC was like my second home, my second family, for my entire adult life. I was at the peak of my career and had just started to take on more leadership activities at the university, and then I get this diagnosis. It knocked me completely over,” said Williams.

March is multiple myeloma awareness month and Williams now is at the forefront in raising awareness about this blood cancer that affects a type of white blood cell known as a plasma cell that helps to fight off infections in the body. The disease causes cancerous plasma cells to multiply and push out healthy blood cells, which can cause damage to the kidneys, bones and immune system. Myeloma is called “multiple” because there are frequently multiple patches or areas in bone marrow where it grows. Black people are not only at twice the risk of developing multiple myeloma when compared to white people, they are also more likely to be diagnosed at a younger age.

Williams considers herself one of the lucky ones.

She made the decision to be treated at MUSC Hollings Cancer Center and quickly entered infusion therapy that continued through June of 2014. Then, under the care of the now retired oncologist Robert K Stuart, M.D., she received a successful stem cell transplant in 2015. Williams still visits Hollings to see hematologist oncologist Hamza Hashmi, M.D., once every three months to make sure nothing has changed.

Despite her diagnosis, Williams was eager to return to work. Unfortunately, the demands of academia were incredibly strenuous, and she was unable to fully practice as a pediatric nurse due to her compromised immune system. She was also still dealing with many health challenges from her diagnosis, like neuropathy in her feet, gastrointestinal issues and ongoing fatigue. Ultimately, she decided to retire.

“Then I began seeking a support group for myself because I didn’t really know anyone with multiple myeloma. My whole career had been in pediatrics, so I didn’t have any exposure to this cancer, or any cancer as a matter of fact, other than what I learned in school years ago. And I couldn’t find a support group,” said Williams.

Williams reached out to the International Myeloma Foundation in hopes of finding a nearby group and discovered none existed in Charleston or the surrounding area. Their response to Williams — “Do you want to start one?” She was surprised, but it was clear there was a need for someone to take the initiative, so why not her? She had the appropriate medical knowledge and background, as well as experience in addressing health disparity issues, so she said yes.

This wasn’t Williams’ first challenge. Her journey toward becoming an advocate for others actually began with the birth of her son, AJ, who was born with lissencephaly, a rare, gene-linked brain malformation with no cure. Williams says it was through parenting and advocating for AJ until his untimely passing at age 13 that she learned to fight for a cause much bigger than herself.

Due to both her experiences with AJ and working with patients at MUSC, Williams calls her transition from treating patients to advocacy work a “seamless shift.” Upon being asked to create a new support group, she immediately reached out to and partnered with a fellow multiple myeloma survivor and started the Charleston Area Multiple Myeloma Network Group. Not long after, she created another group 60 miles away, the Orangeburg Myeloma Network Group, in Orangeburg, SC.

These groups are above all, educational. Every month, a new speaker comes and shares information with the attendees. Types of speakers include a medical professional discussing palliative care, a nurse providing navigation services and an attorney to discuss wills and estate planning. Williams shares they don’t commonly refer to these meetings as support groups, because that implies people are sitting around “sharing sadness.” They instead focus on educating members so they can learn about their disease and possible treatment options, along with what has worked for other myeloma patients. This knowledge empowers them to advocate for themselves.

“Multiple myeloma is not as well-known as some other cancers. Patients go undiagnosed for years. And it’s rare until it happens to you or someone you love. We can’t just say ‘oh, the numbers don’t justify raising awareness.’ We have to bring more awareness now,” said Williams.

She also shares her personal experiences and makes herself available to answer questions and hear concerns from those in her community in one-on-one meetings. There is almost nothing she wouldn’t do to spread awareness.

“Most people don’t know the symptoms and signs of multiple myeloma, but that’s not the way it has to stay. I want to do for multiple myeloma what the Komen Foundation did for breast cancer. And I know that’s a lofty goal. And I might not reach that goal. But if I continue to think that way, then I will continue to fight and try to champion this.”

Williams works as a champion for those facing and recovering from multiple myeloma locally, as well as nationally. She is well-known and respected among medical professions and leading multiple myeloma experts. Williams advocates for the International Myeloma Foundation (IMF), is one of the founding members of the IMF Diversity Initiative, with the vision to improve the short- and long-term outcomes of African American patients with multiple myeloma, and is a part of the IMF American Society of Hematology (ASH) Team, where she attends the annual meeting and uses her social media platform to share the latest clinical updates in myeloma research, therapies, and practice strategies.

Over the last few years, Williams has witnessed how Covid-19 further highlighted health disparities in our state and country. Williams has since fine-tuned her work to really concentrate on underserved populations — those in greatest need. Her overall goal is still to educate all populations and advocate for every patient with multiple myeloma, but now she has a specific focus on giving a voice to those who have little or none.

“But when I was diagnosed, I became even more aware of the health disparities that impact people of color with cancer. And I feel like my career set me up for the place I found myself in, as a patient with multiple myeloma, and seeing the statistics, knowing the outcomes, hearing the stories… I just felt like I had an obligation to give a voice to that.”

Williams is determined to shine a bigger light on the way multiple myeloma is affecting our community and is working with MUSC Hollings Cancer Center to brainstorm new ways to increase local awareness. Williams wants the signs and symptoms of multiple myeloma to be as well known as those of breast or prostate cancer. She is working with Hollings to offer more resources for patients and hopes to create an annual awareness event for anyone to come learn about multiple myeloma, including the latest in research and treatment for the disease.

While many people benefit from the groups she has built in Charleston and Orangeburg, she knows they are not for everyone. Williams is passionate about also getting out in her community, talking about her personal experiences and answering questions one-on-one. She finds that sharing her story through her church is incredibly impactful, as well as being available for personal conversations with people that may have sensitive questions about their diagnosis.

Above all else, Williams is a believer. Despite every incredible obstacle life has thrown at her, she honestly believes each one had meaning and ultimately prepared her for what she’s doing for others today.