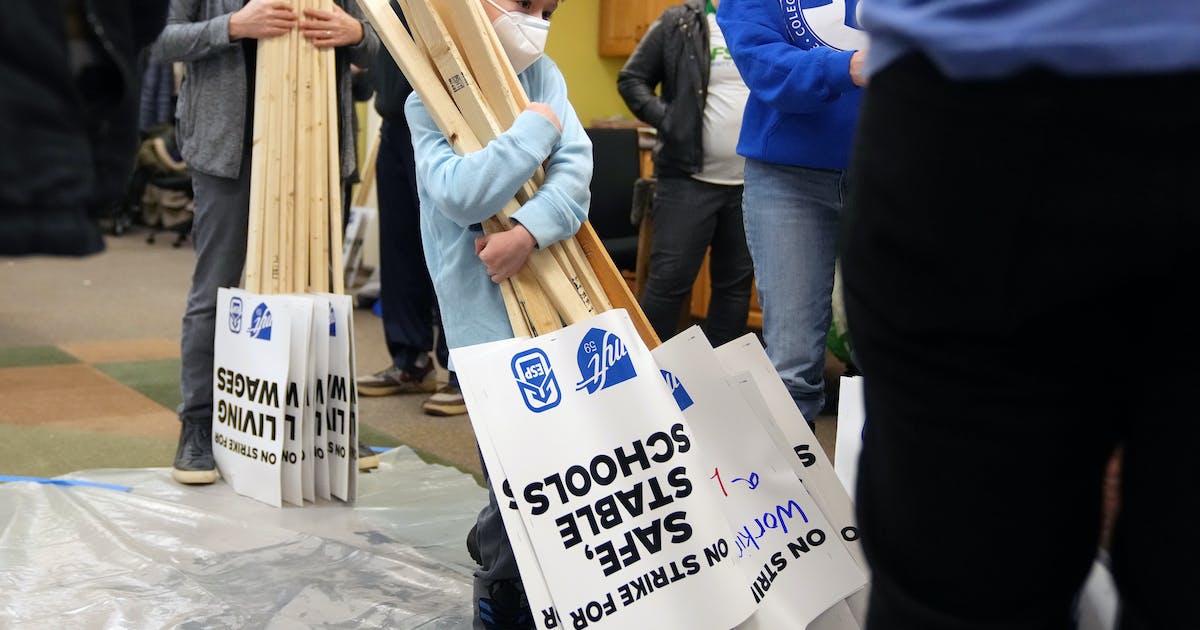 Many Minneapolis school counselors have caseloads topping 450 students — almost twice the workload recommended by the American School Counselor Association. St. Paul schools have one counselor for every 230 students.

District officials and teachers union leaders agree the need for those mental health services is higher than ever and that boosting support for students is a priority. But coming up with a staffing plan to do that — and how to write it into a contract — has proven a sticking point at the bargaining table amid stalled contract negotiations.

Absent resolution of that issue, and others including pay and class-size limits, teachers union members on both sides of the river are ready to go on strike Tuesday morning.

Union leaders have been pushing for contract language to ensure each school has a team of counselors, social workers and school psychologists. District leaders, however, say adding such clauses can limit flexibility as they address shrinking enrollment and budget shortfalls.

“I just keep wondering, if we really want the same things, why is it taking so long to get there?” said Kelsey Clark, a school counselor at South High School in Minneapolis and a member of the Minneapolis Federation of Teachers bargaining team.

Mediation sessions are closed to the public, and negotiating team members are not allowed to discuss the details of proposals on the table. An update from St. Paul schools after Wednesday’s mediation session said the district and union had reached four tentative agreements and had “thoughtful discussions” on several major issues, including mental health support for students. In Minneapolis, mediation sessions have run as long as 12 hours on recent days.

In the event of a strike, all classes would be canceled. Both districts have told families to stay tuned for announcements and updates via e-mail, texts and robocalls.

Educators and lawmakers across the state and country have been raising the alarm about growing student mental health needs, which have been exacerbated by the pandemic.

President Joe Biden mentioned the issue in the State of the Union address last week, and a fact sheet released by the White House said Biden will propose $1 billion in fiscal year 2023 to help schools hire more counselors and psychologists.

The workload for school counselors is an issue across Minnesota, which had one counselor for every 592 students — the fourth highest ratio in the nation — during the 2020-21 school year. The year before, Minnesota schools averaged one counselor per 630 students.

Lawmakers in St. Paul have proposed legislation meant to address the high caseloads for the state’s school counselors.

If approved, the measure would require every public school in the state to employ at least one full-time school counselor and would bar principals from assigning counselors to other duties, such as serving as lunch monitors or supervising study halls.

St. Paul’s union went on a three-day strike in 2020 over issues including mental health supports for students. They secured contract language about placing teams of mental health professionals in each school, something the union says the district now wants to cut from the contract.

“Our fight this time around is to defend what we already have in our contract,” said Leah VanDassor, president of the Saint Paul Federation of Educators.

Thomas Lucy, a member of the St. Paul teachers’ negotiating team who works in the Office of Special Services, acknowledged that the district added behavioral intervention specialists and social workers in 2020. But the needs of students are even more acute after two years of pandemic-fueled quarantines, distance learning and sporadic in-person instruction.

“We all know our kids are really struggling,” he said.

In February, St. Paul Superintendent Joe Gothard said administrators have heard the call to add more staff to address students’ mental health. Over the past couple of years, the district has added staff to lower the caseloads of counselors, intervention specialists and school social workers, he said.

But teachers want the district to do more and they want to have input in how those resources are allocated.

“Our hope with the district this time around is that they will work with us on how to make it better,” Lucy said.

Instead, Lucy said, school district negotiators seem reluctant to include anything in the contract that goes beyond what teachers are paid.

St. Paul officials declined a request for an interview, citing the confidentiality rules of mediation.

In Minneapolis, student mental health services are provided by teams of support specialists as well as alcohol and drug counselors, social workers, counselors and school nurses. The district also added a department of mental health support services to offer short-term crisis intervention and connect families with other mental health resources. That team will cost the district $2.5 million next year.

“Our students are experiencing a plethora of mental health challenges that have been exacerbated by the murder of George Floyd, an increase in community crime, uncertainties caused by the COVID-19 pandemic and the transitions between in-person and distance learning,” district officials wrote Friday in response to questions from the Star Tribune.

Still, Clark, the Minneapolis counselor, said those investments don’t always equate to having more staff in the building, which would lower counselor-to-student ratios and strengthen relationships with students who are struggling more than ever.

“How can we, as counselors, be proactive when there are so few of us? We’re just reacting to major crises at this point,” she said, noting they also have to help students with schedules, credit recovery programs and post-secondary plans.

Juliet Peterson, a senior at Washburn High School in Minneapolis, has ADHD and struggles with social anxiety.

“Mental health is becoming a bigger and bigger issue in schools,” Peterson said. Her peers are facing anxiety and depression, though some worry about burdening already overstretched school staff who could be helping students with more immediate or severe needs.

“There are just so many students,” Peterson said. “It’s hard then to be able to support everyone consistently. And that consistency is necessary.”