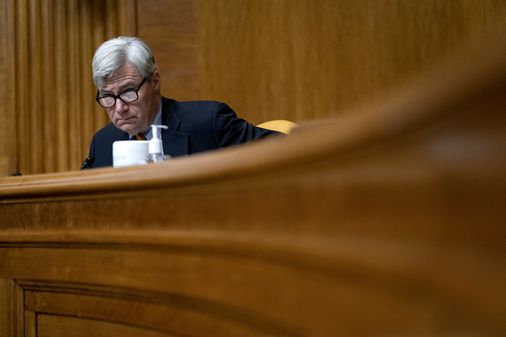 PROVIDENCE — Senator Sheldon Whitehouse on Wednesday introduced legislation that would forgive the student loan debts of frontline health care workers and teachers across the country.

The Student Loan Forgiveness for Frontline Health Workers Act would establish a federal and private loan forgiveness program for health care workers who have made significant contributions during the pandemic.

It’s unclear what contributions would be categorized as “significant” in order to receive any amount of debt forgiveness, or how much relief would be offered.

Representative Carolyn Maloney, a Democrat from New York, introduced the bill in the House — the second time she brought it to the floor. In the legislation, first introduced in April 2021, Maloney wrote that the US Department of Education must carry out a program to forgive the outstanding balance of principal and interest due on federal student loans for borrowers and the US Department of Treasury would have to repay, “in full, ” the outstanding balance of principal and interest due on “certain” private student loans for borrowers. Those frontline workers who died as a result of contracting COVID-19 would also be eligible for debt forgiveness under the bill.

Get Rhode MapA weekday briefing from veteran Rhode Island reporters, focused on the things that matter most in the Ocean State.

“We owe so much to our health care workers and teachers – something we grew to appreciate even more during the COVID-19 crisis,” said Whitehouse, who is also a member of the Senate Finance Committee. “This legislation honors the contributions of these public servants by helping them to wipe the slate clean of student loan debt.”

Industry and union leaders came out in support of Whitehouse’s legislation. Frank Flynn, president of the Rhode Island Federation of Teachers and Health Professionals said a number of the organization’s members began their careers with “staggering” student loan debt while earning salaries significantly less than their private sector peers.

“This often results in a delay in the financial security necessary for important milestones such as marriage or homeownership,” said Flynn, and added that debt forgiveness would help attract and retain a quality workforce.

Patrick Quinn, the executive vice president of SEIU 1199NE, which represents more than 29,000 health care workers in the New England, said rebuilding the workforce has been difficult due to the devastation it faced from the pandemic.

It doesn’t help, he said, that the education requirements for both entry-level positions and incumbent healthcare workers is “expensive and undermines our best efforts.”

Lawrence E. Purtill, the Rhode Island president of the National Education Association, said this legislation was a “step toward alleviating the burden” on the educators and frontline workers employed currently.

“Higher education should only mean greater possibilities not deeper crippling debt,” he said.