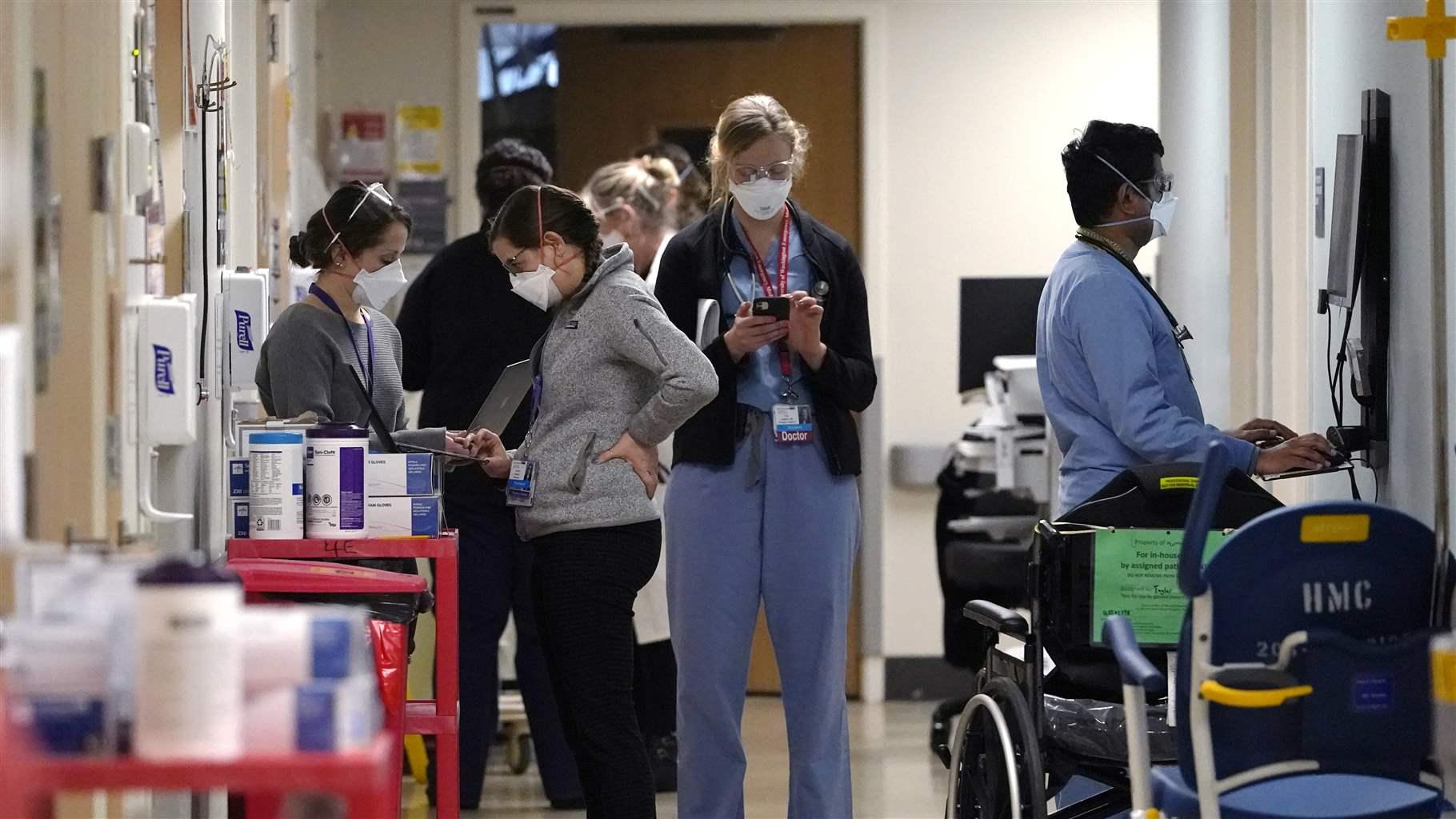 Top Hawaii officials last week received an urgent warning: If they didn’t act, the state would lose the services of hundreds of health care workers who have been essential in confronting the COVID-19 pandemic.

The state had not extended a waiver of licensing requirements that had been in place for the past two years, noted Hilton Raethel, head of the Healthcare Association of Hawaii, which represents the state’s hospitals, skilled nursing centers, assisted living facilities and hospices.

“This will place a materially increased burden on our existing workforce which has been stretched and strained dramatically during the pandemic, and we risk losing even more of our current permanent workforce which will have a significant impact on the ability of our hospitals and other healthcare institutions,” Raethel wrote to state officials.

Even if the state takes that key step, Raethel said in an interview, the underlying crisis in health care will continue. There simply aren’t enough workers of all types—doctors, nurses, respiratory therapists, lab techs, behavioral health specialists, medical assistants—to fill vacancies, not only in Hawaii, but also across the country.

“Workforce in health care is an issue of national significance and is reaching a crisis in many parts of the country,” said Akin Demehin, director of policy at the American Hospital Association trade group. “Leading up to the pandemic there were already significant workforce challenges. The pandemic has amplified them, stemming from fatigue after wave after successive waves of patients.”

The lack of workers has become so dire that at least 20 governors this year directly addressed the situation in their state of the state speeches, proposing a range of policy fixes, according to the National Academy for State Health Policy, a nonpartisan forum of state health policymakers.

That’s a significant change, said Hemi Tewarson, head of the academy, who until recently was a health policy expert at the National Governors Association. There have long been shortages of certain health care workers, she said, but governors instead have focused on issues such as opioid misuse, prescription drug prices and mental health.

“We just have increased difficulty in recruiting and attracting folks who want to live and work in a rural area,” said Craig Thompson, CEO of Golden Valley Memorial Healthcare, a rural Missouri health system more than an hour from Kansas City.

In 2021, the job vacancy rate in Missouri hospitals was over 20%, according to Dave Dillon, a spokesperson for the Missouri Hospital Association. This year, that’s expected to rise to 25% for all hospital medical disciplines, including doctors, respiratory therapists, dieticians and medical assistants, he said.

Similar crises have been building in many states.

Exhaustion and burnout have taken an enormous toll on the health care workforce during the COVID-19 crisis. Nearly 20% of health care workers quit their jobs during the pandemic, and a third of those remaining acknowledged that they’ve thought about quitting, according to a survey by Morning Consult, a marketing research firm.

But the shortage didn’t start with the pandemic and won’t end with it.

In 2019, the United States had nearly 20,000 fewer doctors than required to meet the country’s health care needs, according to an estimate by the Association of American Medical Colleges, which analyzes the physician workforce. At the current rate, the group said, that gap could grow as high as 124,000 by 2034, including a shortage of as many as 48,000 primary care doctors.

“Within the next 10 years, two of every five physicians in the workforce will be 65 or older,” said Michael Dill, the group’s workforce studies director.

Meanwhile, the population also is aging and requiring more health care. “Just when we need physicians more, we will have a large cohort of physicians reaching retirement age,” he said. There aren’t enough physicians in training to replace them.

Similarly, the average age of employed registered nurses climbed from nearly 43 to nearly 48 between 2000 and 2018, and nearly half are now over 50, according to the University of St. Augustine for Health Sciences in Florida.

The U.S. Bureau of Labor Statistics estimates that each year through 2030, there will be nearly 195,000 vacancies for registered nurses. The St. Augustine report says that the profession isn’t producing registered nurses fast enough to meet the demand.


National Nurses United, a union and professional association that claims 175,000 members nationally, insists that most states have enough nurses to meet demand, but that staffing and safety policies at hospitals reduce the numbers of nurses willing to fill positions.

“Hospitals often declare a nursing shortage when they don’t have the will to hire more nurses or to change the conditions which are unattractive to nurses,” such as safety procedures or delegation of responsibilities to those appropriately trained and licensed, said Michelle Mahon, the organization’s assistant director of nursing practice.

Zo Schmidt, a registered nurse in a medical-surgical unit at Kansas City’s Research Medical Center, said the hospital increased the ratio of patients to nurses from 4-to-1 to 6-to-1 early in the pandemic, which has had dire consequences for some patients. “I know there are patients who are alive now because I had four patients that day, who I don’t think would be alive if I had six.

“We don’t mind working our butts off. What kills us, and the reason nurses have left, is because we don’t feel like we’ve done our best for them, because we only have two hands and can only do so much in a day.”

The Research Medical Center did not respond before publication to a query about staffing.

There also is a lack of nursing faculty to train new nurses. One reason, Raethel said, is that nursing schools don’t pay teachers as much as nurses can make on the job. He said private universities in Hawaii pay nursing instructors around $80,000, while the average salary for a registered nurse working in hospital is $105,000.

Dr. Tochi Iroku-Malize, incoming president of the American Academy of Family Physicians, said doctors are being financially squeezed—particularly primary care doctors, who are reimbursed at lower rates than specialists. “Health care payment needs to be restructured so people want to enter primary care,” said Iroku-Malize, who practices on Long Island.

But that conflicts with what Dill of the Association of American Medical Colleges said his survey found. “We’ve looked at it repeatedly over the years and found no evidence that economic factors are keeping down the supply of physicians in the United States,” he said. However, he acknowledged that Medicaid’s low reimbursement rates could deter some physicians from seeing low-income patients, thereby reducing their access to care.

Several governors, including those in Alabama, Colorado, Maine, New York and Wisconsin, have pushed for higher compensation for health care workers.

In her state of the state address, Democratic Gov. Janet Mills in Maine cited the state’s investment of $600 million in state and federal funds to raise Medicaid reimbursement rates, which would increase payment to doctors who see low-income patients. She proposed spending $50 million more.

New York Gov. Kathy Hochul, another Democrat, proposed making a $10 billion, multiyear investment in the health care workforce to raise the Medicaid reimbursement rate, provide retention bonuses to frontline medical providers and increase the pipeline of those going into health care. The New York legislature is discussing an even higher financial commitment.

Many Medicaid Recipients Could Lose Coverage as Pandemic Ends


Governors in Alaska, Georgia, Hawaii, Maine, New Mexico and Oklahoma proposed expanding education programs to train more nurses and other medical providers. Georgia Republican Gov. Brian Kemp, for example, said he was including millions of dollars in his budget proposal to train more nurses and add medical residency slots. Over time, he said, the goal is to increase the health care workforce by 1,300.

In Iowa, Republican Gov. Kim Reynolds announced a new apprenticeship program for high school students that would enable them to become certified nursing assistants before they graduated.

Reynolds, Hochul and Democrats J.B. Pritzker of Illinois and Daniel McKee of Rhode Island pledged additional scholarships, tuition reimbursement or loan forgiveness for students training in health care, particularly for those who stay to practice in those states.

Many states relaxed licensing requirements during the pandemic to enable out-of-staters to practice within their borders. Hochul and Republican Gov. Kristi Noem of South Dakota want to make those changes permanent to attract more providers.

They also point to the fundamental nature of the U.S. health system, which rewards volume—such as office visits—rather than outcomes such as keeping people healthy and out of hospitals. Until that changes, they say, the grind will continue for all medical providers. And so will the vacant positions.

Telehealth May Be Here to Stay