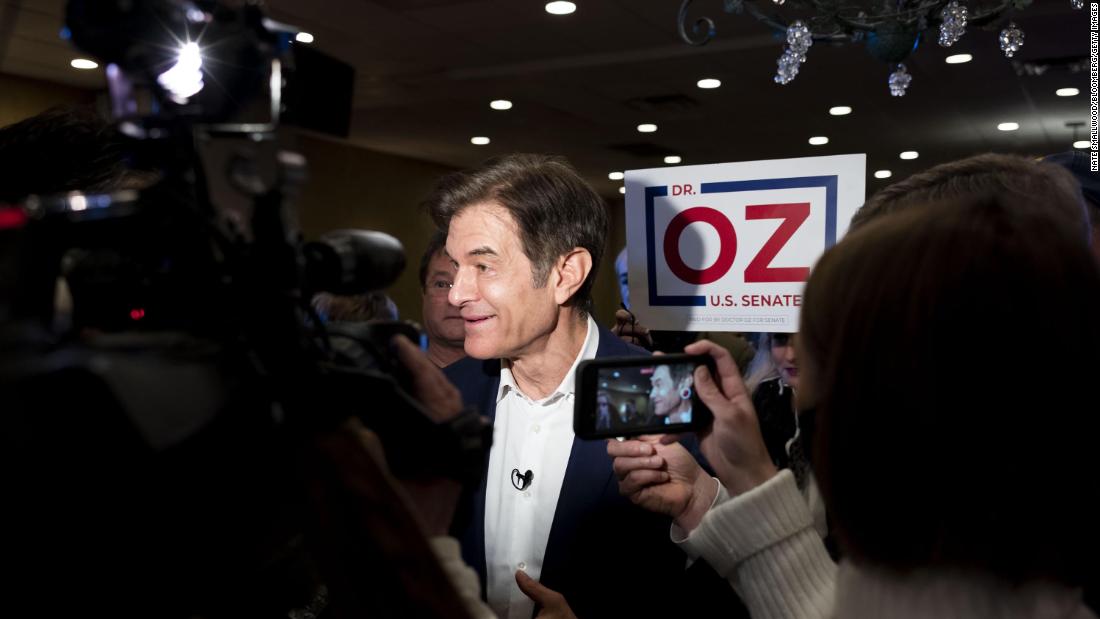 A review by CNN’s KFile of hundreds of Oz’s television, radio, print and social media appearances over more than a decade found that Oz has supported a health insurance mandate for “everyone … to be in the system” and backed government-provided health care coverage for poor Americans and for minors. Of the health care systems he liked most, Oz has cited Germany’s and Switzerland’s, which utilize mandatory universal systems administered by private companies.

Many of Oz’s statements on health care align with some of the key tenets of the Affordable Care Act, otherwise known as Obamacare. In a review of his statements, CNN’s KFile found that Oz praised how the law dramatically increased the number of insured Americans, while later criticizing it for not being well understood and not tackling the costs of health care. He also promoted Obamacare in a 2010 ad for the California Endowment, a left-leaning organization that says on its website it’s dedicated to improving the well-being of Californians.

Brittany Yanick, a spokeswoman for the Oz campaign, told CNN’s KFile that Oz “does not support a big government takeover of the health insurance industry” and that he “would not have voted for Obamacare.”

Oz “believes that the American healthcare system is in need of improvement” but that Obamacare was “the wrong one,” Yanick said in an email.

Republicans largely abandoned messaging and plans on health care after they repeatedly failed to repeal and replace Obamacare. The party’s 2016 platform, which it adopted again in 2020, advocated repealing Obamacare, saying that “it imposed a Euro-style bureaucracy to manage its unworkable, budget-busting, conflicting provisions.” The GOP platform also laid out the party’s goal to “reduce mandates.”
Oz is running in one of the most closely watched races of the 2022 midterms against a large field of candidates, including David McCormick, a former hedge fund executive, in the Republican primary on May 17. A Fox News poll from early March shows McCormick in the lead, with 24% of Republican primary voters in Pennsylvania saying they would vote for him if the primary were held that day and Oz at 15%, though a majority of voters said they could change their minds about whom they’re supporting.
Before running for the Senate, Oz was the host of a well-known daytime show, “The Dr. Oz Show,” which first aired in 2009 after Oprah Winfrey frequently featured him on her own show. Oz’s brand as “America’s Doctor” has faced scrutiny from the medical community over treatments he promotes — including from a group of doctors who in 2015 accused Oz of “manifesting an egregious lack of integrity by promoting quack treatments and cures in the interest of personal financial gain.”

As a physician, Oz advocated that everyone in America have insurance and has said the government should provide health care coverage to Americans who cannot afford it

“It should be mandatory that everybody in America have healthcare coverage. If you can’t afford it, we have to give it to you,” Oz told The Seattle Times in 2009.

He also frequently described the moral dilemmas he faced to provide care to uninsured patients.

“There have been times when I have been tempted to break my Hippocratic oath, to put my patient first, because although I could save their life, they didn’t have the ability to reimburse whoever had to pay for it. And what happens then is that the system goes bankrupt. You can’t afford those services anymore. We can’t have people who have given their life to healthcare being pulled in two directions because one party says you can’t help that person. They’re not in the system,” Oz said in an appearance on CNN from July 2007.

He said it was “heartbreaking” that millions of children were uninsured, and that politicians should mandate insurance for everyone under 18.

“That’s a good starting point for any candidate. You should — if you’re under 18 years of age in this country — you should have insurance. Period. No questions. All you need is a birth certificate to prove that you’re less than 18 years of age; it ought to be done,” Oz said.

In an interview with CNN’s Don Lemon from September 2009, Oz said he liked the health care systems in Germany and Switzerland, which have mandatory universal health care systems run by private companies, and that the government has an obligation to provide coverage.

“The systems that I like the most are actually the kind of systems they have in Germany or Switzerland, where they actually afford patients the opportunity to, to get insurance from many different companies, but they have to buy one type of insurance or another. You know, so we don’t have the option as consumers to not have coverage, but the government has the obligation [to] and so do es [sic] the insurance companies providing coverage to us. I think we can make this happen in America,” said Oz.

In a CNN interview from January 2012, Oz insisted that “everyone has to be in the system. You cannot drive a system that’s gonna be aiming at preventing illness if everyone’s not in it.”

“The whole gaming of health insurance and, and health care in America is based on that fundamental principle: Insure people who aren’t sick and you don’t have to spend more money on them. But if everybody’s in the system, then it pays for all of us,” he said.

While Oz has never supported Obamacare in full, despite appearing in a 2010 ad promoting enrollment of the program, he has continuously said that the law increased the number of insured Americans but noted that the compromise in getting it passed meant it failed to address the costs of health care.
On the red carpet on his way to the 2011 White House Correspondents Dinner, Oz called Obamacare “half-good” for providing a “safety net” to keep uninsured Americans from receiving poor treatment in the health care system, saying you “have to provide something” for the uninsured.

“Doctor Oz also believes that Obamacare had bad parts, like the destabilization of the health insurance market, the mandates, and the taxes. Finally, Doctor Oz would not have voted for Obamacare,” Yanick said.

In a Fox Business article from 2016, Oz said Obamacare was “a very brave effort to include more Americans in the healthcare system. The problem with it though is that there was compromise required to get it passed, which limited its ability to address the quality of care and more importantly the cost of care.”
As a candidate, Oz has offered a health care policy of his own, describing on his website that he would “expand access to private sector plans expanded by President Trump and beloved by seniors for their low costs and high quality that could be available to all Americans who want them.”

That plan, which he does not name on his website, is known as “Medicare Advantage for All,” which would expand the Medicare program that enables seniors to choose private plans to deliver their health coverage to all Americans not covered by Medicaid.

Yanick, Oz’s spokeswoman, clarified that Oz calls his health care plan “Medicare Advantage Plus — which is an expansion of privately run health insurance plans that happened under the Trump administration and are one of the Trump administration’s great successes. These plans are high-quality, low-cost, are beloved by seniors, and should be available to everyone who wants them.”

Oz co-wrote a 2020 op-ed endorsing the plan, claiming it would create a “resilient health-care system for future health crises” and provide a path toward universal coverage in the US.
Throughout the pandemic, he continued to tout the benefits of the plan and claimed that Europe’s success in using plans like Medicare Advantage for All would address inequality in health care “across different socioeconomic spectrums.”