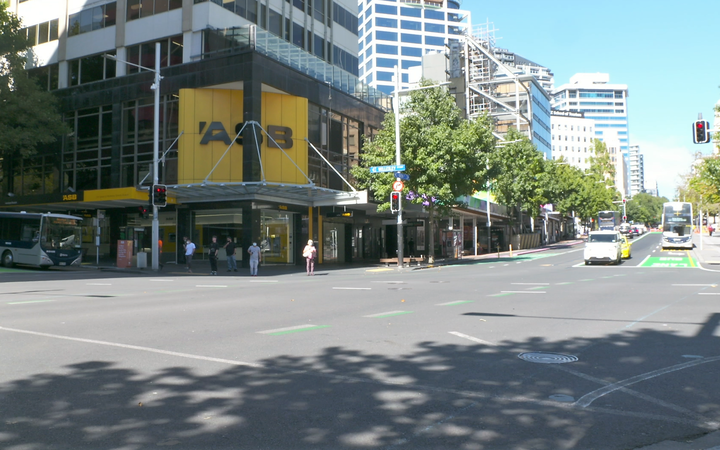 Auckland City’s golden mile has yet to stage its own recovery from lockdowns and the exodus of thousands of inner city workers.

Two years into the pandemic, dozens of shops remain empty on the main street and foot traffic to the CBD is still less than half what it was in 2019.

Along Queen Street, from the Town Hall to Customs Street, there are at least 34 empty shops with ‘for lease’ signs hanging in the windows.

On the brink is a shoe store, whose owner said sales were terribly low.

“It has taken a toll on me, to be here every day and not get enough sales. Now we are at the point where customers don’t even come in because there’s hardly anyone in the city and people don’t have money to spend.”

“My lease comes to an end in a month so I will be closing doors and going. There’s no other positive factors that could keep me here because financially I’m drained,” she said.

“Even though borders are open I don’t think we can actually play the waiting game, it could be months but it could be years before the city turns around again.”

The store is in Queen’s Arcade, where more than half of the retailers have closed down or relocated.

The speciality music store Marbecks Records is among those remaining.

“It’s kind of like a big family in here, so it’s tragic. These are people’s lives, 60 percent of them gone. They’ve shut up shop or they’ve moved somewhere else a few have gone elsewhere, others have just given up they just didn’t have the horsepower to see it through,” he said.

“We’re lucky because we’ve got an online presence and that’s just got us through.”

He said the city needed office workers to return to get its hum back, along with international tourists.

“It should be pumping, there should be a good flow [of people] but it’s very quiet so that is a major problem.”

The ongoing Omicron outbreak has put a dampener on outings.

Heart of the City pedestrian counts show foot traffic in the city centre was down 65 percent last week compared to the same time in 2019 – adding up to about one million fewer visits.

Opposite the Civic Theatre, Remedy Coffee has survived the city’s lockdowns and, last week, spent three days mopping up flood water from the deluge.

When RNZ visited, owner Richard O’Hanlon was busy serving customers but he said it was not business as usual.

“It’s slowly picking up we have good days and bad. As for Auckland [weather] we got flooded last week and had to shut for three days, we’re back open again but the streets are quiet, people are still working from home.”

He said the central city was looking better now that some roadworks were finished.

And he was hoping Australians stopped in for their coffee fix when the border reopened to our neighbours across the Tasman on 13 April.

“We normally do quite well with the Australians I think because of the layout of the shop, the fact that we are in the CBD, I can’t wait for them to come back.”

There is some hope for businesses toughing it out.

Marbeck said his music store had surprisingly good sales at the weekend.

“It’s been really, really tough, probably the toughest we’ve ever known it in fact. But there are signs of it recovering, in the last week we’ve seen little signs.”

Heart of the City said foot traffic had been creeping up over recent days in the city centre.