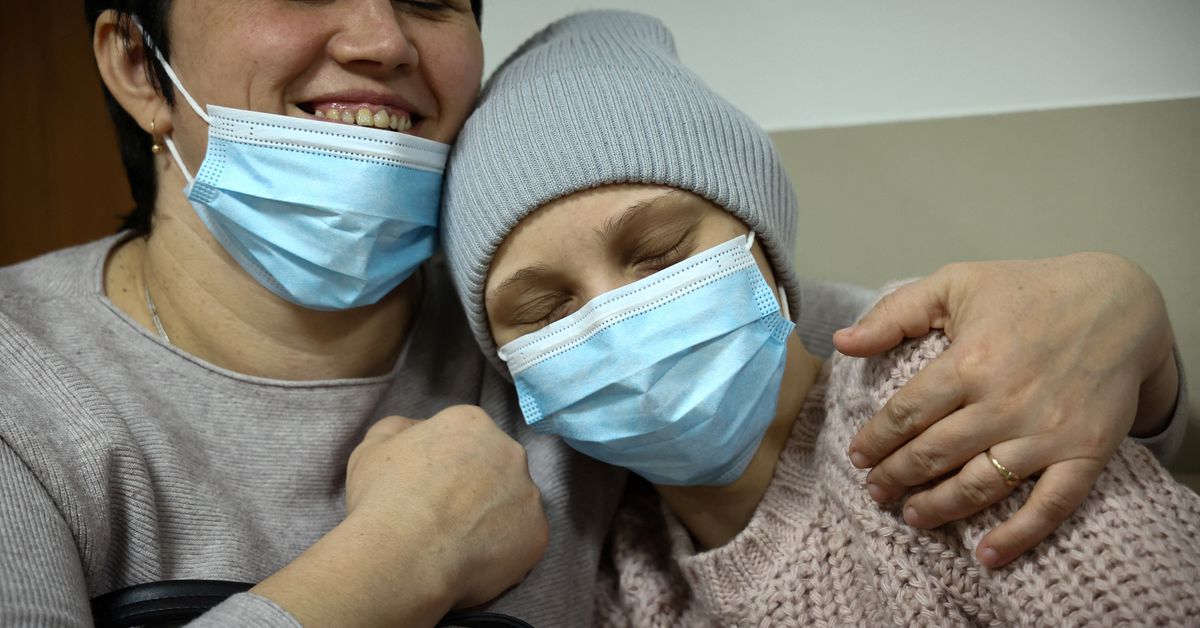 WARSAW/LONDON, March 8 (Reuters) – Katya was on the way to hospital for an urgent operation for her 17-year-old daughter Alinka, who has bone cancer, when Russia invaded Ukraine.

Their doctor at Kyiv’s National Cancer Institute called them and advised them to turn around and go home for their own safety. It soon dawned on the family that the only option was to continue Alinka’s treatment abroad.

“We decided (this) without hesitation, because this is not only a war with our occupiers, but also a war for the life of our child,” said Katya, who did not give her surname.

She and her daughter are now in Warsaw, Poland, awaiting more treatment for Alinka, whose condition is stable.

They are among more than one million people who have fled to Poland from Ukraine to escape the escalating war. Another 700,000 have gone to neighbouring countries like Romania and Moldova. Four million people may ultimately flee, the United Nations has estimated.

The World Health Organization (WHO) is warning that the exodus raises the spectre of a regional health catastrophe on top of the huge toll in death and destruction from the fighting in Ukraine.

“(It’s) not confined to one or two countries, but really regionally, and globally,” WHO Europe director Hans Kluge told Reuters in an interview late last week.

In wartime, healthcare crises – a lack of access to hospitals and treatment, outbreaks of disease, malnutrition and the like – often kill far more people than bombs and bullets.

The fear now is that the refugee influx into neighbouring countries will push their health systems over the edge too.

The WHO’s Kluge said health services in Poland, Slovakia, Romania and Moldova were coping so far. “But this is as of today. We have seen in the past that health systems have a breaking point, and the situation is very unpredictable.”

Those bearing the brunt of refugee arrivals fear that the breaking point is close, pointing out that the numbers of beds and doctors cannot double overnight, particularly in healthcare systems already exhausted by two years of COVID-19.

“We can announce that we will treat all Ukrainian children, but I am afraid it is simply unrealistic. We will provide the best possible help, but we cannot work miracles,” said Ernest Kuchar, head of paediatrics at the Medical University of Warsaw hospital.

The Polish Health Ministry said its hospitals have the capacity to treat around 7,000 patients from Ukraine.

Up to one million new potential patients would overwhelm any country’s health system, according to Kate White, emergency programme manager for the aid group Medecins Sans Frontieres (Doctors Without Borders).

As yet there are no field hospitals on the Hungarian, Polish Slovak or Moldovan borders, the U.N. refugee agency confirmed.

But all partners involved in the relief efforts said it was longer-term or chronic needs, often among patients arriving without documentation, medication or the ability to speak the local language, that could prove the biggest challenge.

These include treating people like Alinka, as well as those with other diseases including diabetes, HIV and tuberculosis. Ukraine, a country of 44 million, has 2.3 million people with diabetes, 250,000 people living with HIV and around 160,000 cancer patients, according to the latest WHO estimates.

Diabetes, COVID-19 and other infectious diseases, and cardiovascular and respiratory conditions are all marked “red”, meaning that without attention there is a real risk of “high levels of morbidity of mortality” from the impact of the war on healthcare, the assessment reads.

In Warsaw, Kuchar said, almost every refugee child arriving at his hospital has tested positive for COVID-19, probably due to the cramped conditions in which they fled Ukraine, where new coronavirus cases were averaging around 27,000 a day pre-war with only 35% of the population vaccinated.

Mental health is also red on the WHO’s list, as refugees cope with unthinkable trauma.

Katya, in Warsaw, understands that. She broke down as she explained the arduous 24-hour journey she made with her sick daughter to reach the Polish capital.

Her husband and three other children remain in Ukraine, and she is desperately worried for them, as well as about how Alinka will recover from the trip and get the treatment she needs.

Katya said that what has happened to Ukraine in recent weeks is hard enough for a healthy adult to cope with, but the pressure on a sick child is unthinkable.

Reporting by Anna Koper and Jennifer Rigby with additional reporting by Kacper Pempel in Warsaw and Olga Vyshnevska in Gdansk, Poland; editing by Michele Gershberg and Mark Heinrich