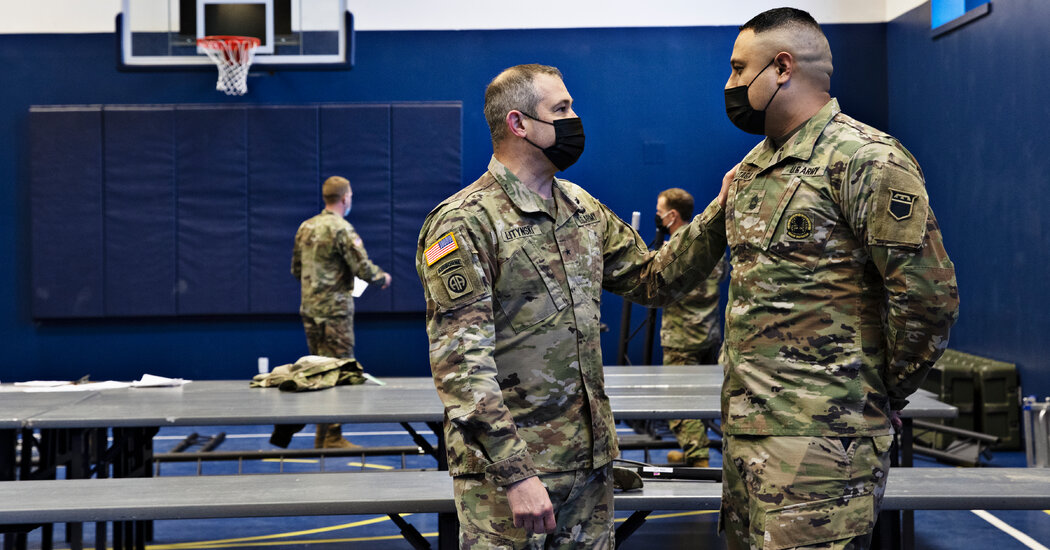 WASHINGTON — Brig. Gen. Ernest Litynski has received numerous awards and decorations during his nearly three decades in the Army. But he is best known among soldiers and his superiors for his campaign to illuminate mental health issues among troops, scraping away bit by bit at the stigma that often leads to tragedy.

In meetings with new formations of Army Reserve troops, he might first talk about physical fitness and training before moving on to the story of his own unraveling after he returned from Afghanistan, when he would sit in his darkened basement, ignoring his family and staring into nothingness.

“I removed myself from everybody between 2007 and 2010,” he recalled. “I wouldn’t go to family parties, events, wouldn’t go out with my family to eat. I would turn the TV on just for noise. I would not go up to bed with my wife. The burden I put on my wife and 12-year-old daughter had to be the worst.”

His daughter did not speak to him for years, he said.

He tells his story at ceremonies and gatherings, and made a video that the Army has posted to some of its Facebook accounts, generally a repository for war remembrances, vaccine information and images of cold weather drills. “There’s a shame if you show weakness,” he says, voice wavering as he recounts his struggles with post-traumatic stress. “That’s the way I felt.”

General Litynski’s campaign is a striking one within the military, where resilience is not just celebrated but part of the job description.

After two decades of war, the military has yet to make significant progress on what many experts, lawmakers and service members say are among its most persistent problems — unaddressed mental health issues and rising suicide rates among troops.

“The needle has not moved much at all in this,” said Mark C. Russell, a former Navy commander who is now a professor at Antioch University in Seattle with expertise in military trauma. He added, “So it’s rare when someone with a star on his lapel is speaking out.”

The suicide rate among active-duty service members increased by more than 40 percent from 2015 to 2020, according to Defense Department data. The military had historically lagged the general population in suicide rates but in recent years has caught up.

A report last year from the Costs of War Project at Brown University found that an estimated 30,177 active duty military personnel and veterans who have served since the Sept. 11, 2001, attacks died by suicide, compared with the 7,057 killed in military operations during the two-decade war against terrorism.

Over several years of writing about veterans and military affairs, I have received scores of emails from desperate service members, or their family members, about their struggles with mental health issues and difficulty getting help when they are out of the service. Some families have written about losing loved ones to suicide.

Representative Jackie Speier, a California Democrat who serves on the House Armed Services Committee and is retiring when her term ends in January, said the issue was so pressing, “I can guarantee you upfront that is going to be the focus of my work this year.”

While some service members, like General Litynski, have suffered from combat-related traumas or injuries, others come into the military with mental health issues that are not revealed in medical screenings, or that later become more intense.

The problem mirrors a larger crisis in the nation, with millions of Americans lacking access or not seeking mental health care.

“Members of the military have to function at a very high level and that takes a toll,” said Sherman Gillums Jr., a retired Marine officer and a former senior executive at Paralyzed Veterans of America.

“We are taught to mask anything that is wrong with us, to adapt and overcome. Military culture looks at asking for help as a liability, from recruitment to training to the rest of one’s career.”

General Litynski was born in Chicago and joined the Army in 1994. He has multiple advanced degrees and military awards over a career that has included tours in Iraq and Afghanistan, and has held a variety of active and reserve component command positions. He is now the commanding general of the 76th Operational Response Command in Salt Lake City.

After he returned from overseas in 2009, General Litynski said that his life at work seemed fine, but he would isolate himself in his basement when he returned home at night. “I didn’t do anything,” he said, other than “let time go by.”

His few interactions with his family were generally stormy. When his wife, Jennifer, dented their minivan in a parking lot, he reacted by hitting the vehicle violently and repeatedly. “This was a 180-degree turn from who Ernie Litynski was,” he said.

In 2011, his wife said she had enough. “That is what sparked it for me. That moment in essence was an ultimatum, and rightly so,” General Litynski said.

He sought help and began to reflect on the troops he had seen die overseas and the death of his younger daughter from a rare genetic disease less than a year after she was born.

His psychiatrist at the Department of Veterans Affairs had an idea: Discuss his struggles with his unit at the time in Milwaukee in lieu of giving the usual PowerPoint on post-traumatic stress.

General Litynski worried that no one would understand and how it might affect his career. But ultimately, he said, “I went all in.”

Some in the audience revealed experiences they had previously felt too ashamed to share. “I had young soldiers talk to me afterward and hug me and cry,” he said.

The speech became his brand, of sorts. “When he first came to our unit, he told us about how he felt helpless and was ready to give it up,” said Scott Alsup, who served under General Litynski in Iraq. “He helped get me into rehab, which probably saved my life.”

“Being a man, you don’t talk about your feelings,” he added, “and having someone who was not afraid to show that was a huge, huge relief.”

In 2019, after speaking at an event in Florida for redeploying soldiers, General Litynski caught the attention of Army brass, who encouraged him to make a video, which was posted on Army Facebook pages.

While many applaud General Litynski’s efforts, veterans who suffered from mental health issues while serving said the military needed to do much more, like improve health screenings of new recruits. Training must change and leaders must learn to address problems before they spiral, they say.

“There is stigma, it persists and it is real,” said Elizabeth S. Pietralczyk, a family doctor in Alaska who joined the Air Force in 2003 to assist with medical school. She left the military in 2021 before hitting her lifetime pension award, she said, because of her mental health struggles. “People doubt your sincerity when you’ve done an amazing job at handling everything up until it implodes,” she said. “It is a common story.”

Dr. Pietralczyk was offered a post as a flight doctor, but to get it, she needed training in case she was ever captured, she said. She declined. “A lot of training exercises can be triggers for people,” she explained. “A lot of people don’t recognize that.”

Badgering from her superiors led to panic, anxiety and depression, she said. She considered hospitalization, but feared how that might affect her career as a doctor.

The message of resilience at all costs is necessary for war fighters, but it can ultimately backfire, military leaders and experts say.

“The readiness of the force depends on the strength and resilience of every soldier,” said Simon B. Flake, an Army spokesman.

“It takes a self-aware, courageous soldier to admit they need help,” he added, noting that the Army has increased support services for troops.

Members of the National Guard and the Reserve often lack medical insurance or do not have access to mental health resources. “We see so many stories when a mental health process ends in a tragedy,” said J. Roy Robinson, a retired brigadier general and the president of the National Guard Association of the United States. “I truly believe a large amount of those issues are tied to access.”

“This could be an intergenerational shift,” he said, “starting with young people who see themselves as humans first beyond their uniform and weapon.”