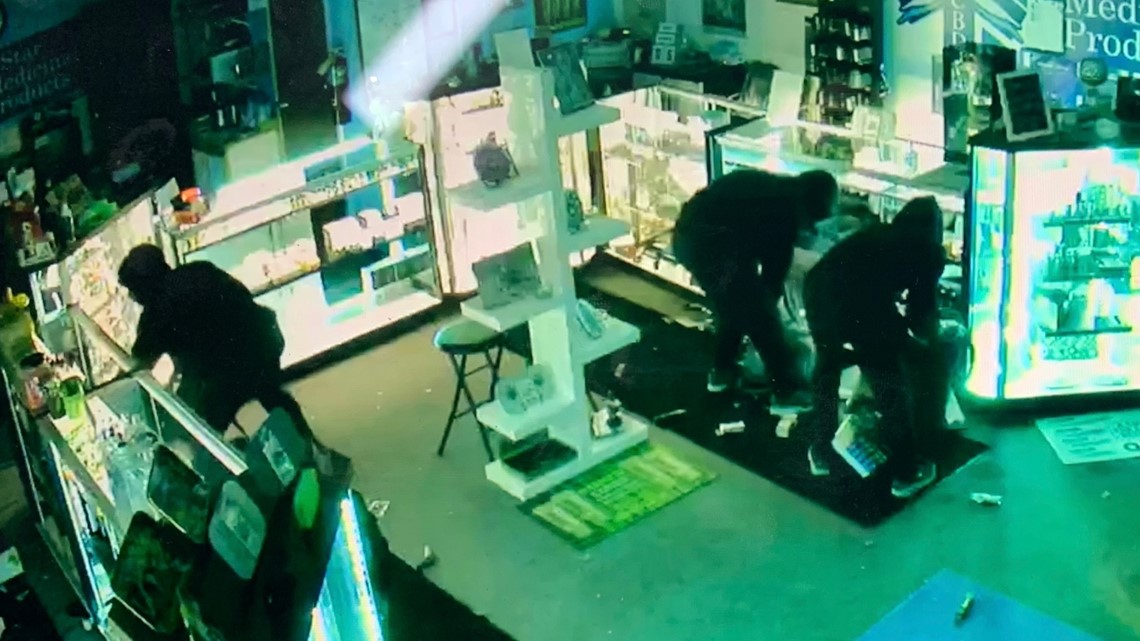 “This is my livelihood and that’s the problem, small businesses are barely making it because of COVID and then this, this might shut my doors,” Welsh said.

“Four years and I’ve never had any problems ever. No problems at all. Then two weeks ago we had the break-in and then they came back two weeks later, almost to the hour,” Welsh said.

Welsh owns a small CBD shop called 5 Star Medicinal Products on the west side of Indianapolis.

On Feb. 19, Tanya was in the hospital when she got notified that the alarm to her business went off around 3 a.m.

“That’s when they shattered the door with the shovel and came in. They were only in the shop for about 35 seconds, but I mean they destroyed a lot in that short time,” she said.

Then last Sunday, a group of five people returned and kicked down the plywood from the broken door. Tanya said she has no choice but to watch the entire thing unfold from her phone.

“I’m watching them the whole time and begging 911 to please respond and [the dispatcher] keeps asking all these questions and I’m like, ‘Can you just send the police? Can you just put them in route? They have already done this two weeks ago,’”

The police did not get there in time. Tanya estimates the thieves were in there for at least two minutes. They got away with hundreds of edibles with THC in them, disposable vapes and smoking wraps.

“They were just confident that the police weren’t coming any time soon. They brought extra bags. So, once their bags were full, they would come back with empty ones,” Welsh said.

Welsh estimates both burglaries will cost her more than $10,000 between the damage and stolen products. She said insurance will not cover any of the products, only the door and possibly the display cases.

“This is my livelihood and that’s the problem, small businesses are barely making it because of COVID and then this, this might shut my doors,” Welsh said.

Based on the videos, Tanya believes it’s the same people in both cases. She said in the second burglary, one of the thieves had angel wings on the back of their sweatshirt. She hopes someone recognizes it and calls the police.

“They aren’t going to stop at my shop. When they can’t get into my shop any longer, they are going to go to another shop or to someone’s home. They are going to keep doing this,” she said. “I really just want this to end, and I want to keep my store open.”

Welsh currently has cameras and an alarm system in place. She is hoping to put bars on the window and door soon.