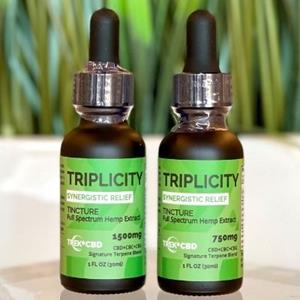 WAKE FOREST, N.C., March 08, 2022 (GLOBE NEWSWIRE) — Trek CBD is excited to announce the launch of its reformulated proprietary hemp extract, Triplicity. Triplicity is designed with the customer’s best life in mind. It’s unique because of its proprietary blend of CBD, CBC, CBG, and select terpenes.

Terpenes are aromatic compounds found in many plants, which is what gives plants their signature smell. They also have medicinal properties that work with the endocannabinoid system and synergistically with other cannabinoids.

Rigorous testing and customer feedback contributed to the new formulation of Triplicity. After examining three cannabinoids CBD, CBC, and CBG, the team at Trek CBD believed that when used in combination, good things were possible. After two years, three formulations, and multiple test batches later, the new Triplicity was born. A new signature terpene blend, the addition of THC, and a citrus taste all formulate to make this new Triplicity stand out.

One Trek CBD customer has commented: “I’m  just happy that there’s something that actually works…this is the first time I’ve been given CBD that does something, everything else I’ve tried has done nothing!”

Triplicity was developed by Trek CBD co-founder, Nick Pione, in conjunction with Open Book Extracts, one of the leading hemp manufacturers.

“The past two years have been difficult for many of us, and Triplicity is designed to reduce stress and restore balance to our day-to-day lives. Triplicity combines CBD with two rare cannabinoids, CBC and CBG, and a proprietary Terpene Blend; we wanted it to be different and it is.” – Nick Pione

Trek CBD was founded in Wake Forest, NC, in 2019. The company’s mission is to help people experience plant-based wellness through education, quality, and value. Call Nick Pione at Trek CBD at 919-761-5020 to learn more about Triplicity.

This content was issued through the press release distribution service at Newswire.com.