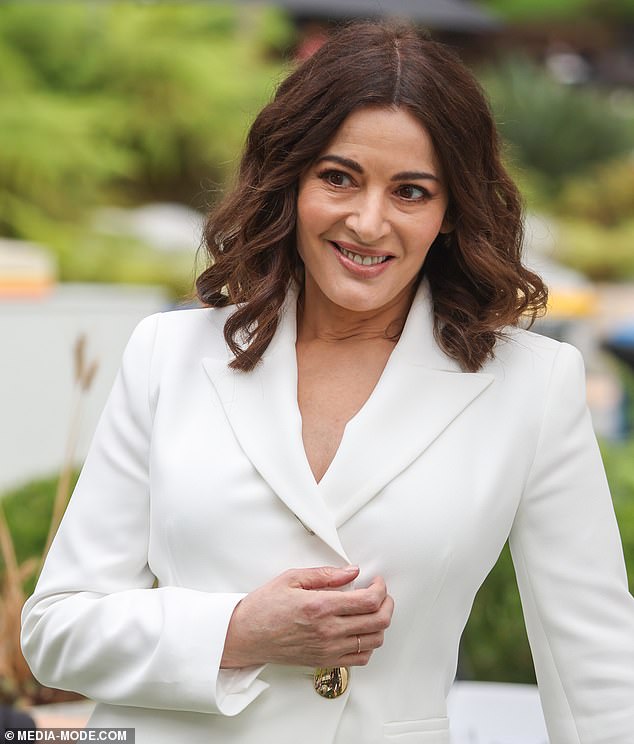 Nigella Lawson once credited her weight loss to a gentle form of yoga, but now she’s taking a more muscular approach to exercise.

‘I’ve kept up my weights exercises, which I started during the lockdowns,’ the Domestic Goddess says. ‘I have a huge weights collection now.’

She still enjoys a hearty meal, however, and reveals that her favourite cookbook is called Hot Fat, ‘full of recipes for deep-fried food’.

The 62-year-old television chef says: ‘I bought myself an electric fat fryer as a Christmas present to myself and I absolutely adore it.’

Poor Kate Garraway has been dealt another blow. Her Covid-hit husband’s once-successful firm has gone into liquidation with debts of almost £200,000.

I can disclose that Derek Draper’s psychotherapy company, Astra Aspera Ltd, owes £184,000 — including £125,000 in taxes. A liquidator was appointed on Tuesday to break up the firm’s assets.

‘It’s terribly sad, but Derek can’t work and has no prospect of being able to do so in the near future, so Kate thought it best to close it down,’ one of her friends tells me. 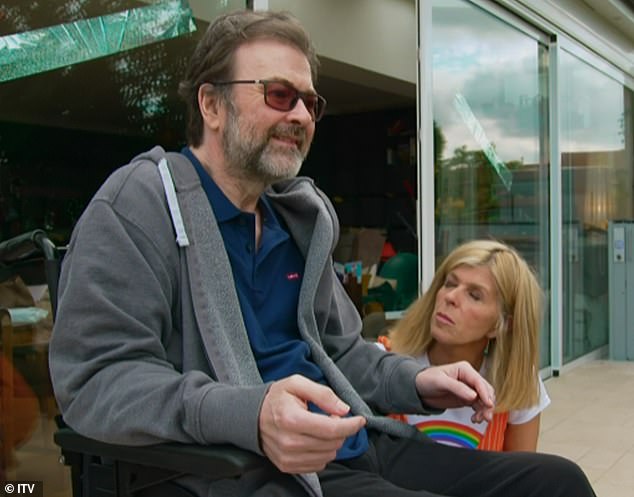 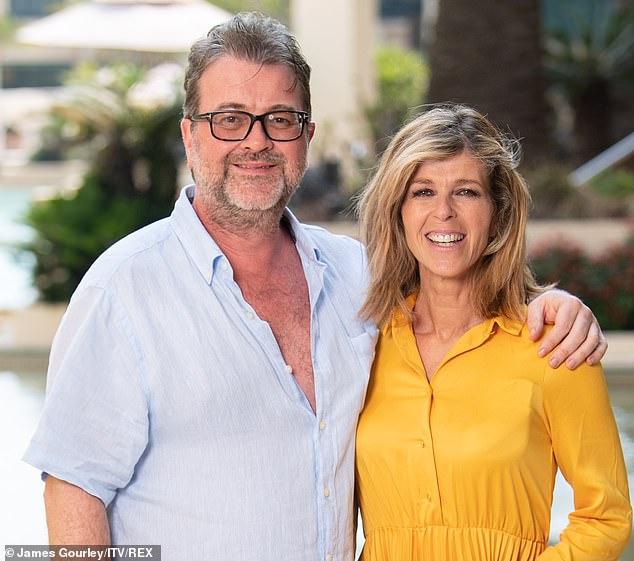 Garraway, 54, was appointed director last year after Draper, also 54, was struck down with Covid in 2020

Garraway, 54, was appointed director last year after Draper, also 54, was struck down with Covid in 2020. The television presenter revealed last month that she had accompanied him to Mexico for a medical assessment by a U.S. doctor who may be able to reverse the damage Covid did to his body.

They hired a specialist nurse to care for Draper on the 16-hour flight. He will return this month for a 28-day stay so doctors can monitor his brain, liver and lungs.

‘Covid has devastated him,’ she said last year. ‘His digestive system, his liver, his heart, his nervous system. We’re pretty sure the inflammation did pass through his brain. He is in a terrible state.’ 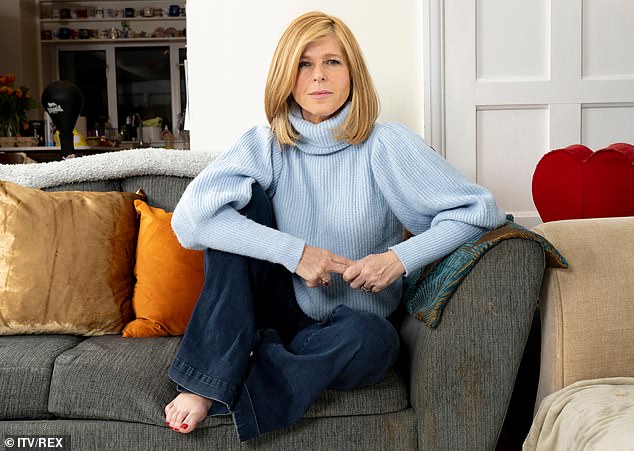 The star had kept her worries about the business a secret despite making two emotionally charged documentaries about life with her husband, including one last month called Caring For Derek.

She recently became host of ITV’s Life Stories while also caring for the couple’s children, Darcey, 15, and William, 12. But she also has to fund the round-the-clock care for her husband, whom she married in 2005.

Astra Aspera’s name is a take on the Latin phrase ‘ad astra per aspera’, which means ‘to the stars through hardship’. Its estimated ‘deficiency for creditors’ is reported in a statement of affairs signed off by Garraway earlier this month.

Draper, who set up the business in 2011, had enjoyed a money-spinning year before being hit by Covid, raking in close to £1 million.

The Mail on Sunday reported earlier this month that Garraway had been determined to save the former Labour Party spin doctor’s company, but eventually accepted that the firm would have to fold.

Zac Goldsmith has an interesting take on winning friends and influencing people. The Environment Minister has branded many fellow Tories ignorant barbarians online for failing to support his eco-policies.

He pointed out more than half of Tory MPs had signed up to the Environment Network supporting Net Zero.

After a backlash, he said: ‘Apology to who? People who think we can survive, let alone flourish, without a healthy environment? No apologies due.’

ROSE TO THE CHALLENGE: Strictly Come Dancing winner Rose Ayling-Ellis, the show’s first-ever deaf contestant, is ‘proud’ to have inspired more deaf people to take up ballroom dancing. Rose, 27, tells me: ‘It’s become a purpose for me now to raise awareness on what the deaf community can do.’

GLITTERBALL INSPIRED: The TV presenter AJ Odudu, 34, was forced to pull out of the Strictly final because of a foot injury. Now back on her feet, she was keen to show off her moves on the blue carpet in a glittering dress (right). She won Entertainment Performance for her role as co-host on the reboot of The Big Breakfast. ‘It’s a dream. I watched the show growing up. All of a sudden I’m hosting it,’ she says.

SINNER TO WINNER: Keeley Hawes, 46, shimmered in a £2,500 metallic gown by The Vampire’s Wife. She starred in Channel 4 drama It’s A Sin, which won three awards. But she was on the receiving end of a backlash for playing Valerie, who refused to accept the homosexuality of her son, played by Olly Alexander. ‘I had quite a lot of people feeling angry towards me,’ says Keeley (below right). ‘But I also got so many messages from people saying, ‘That was my mother and she watched it and has since spoken to me because of this story.’ ‘ 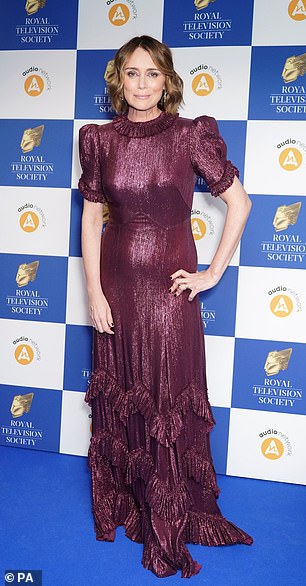 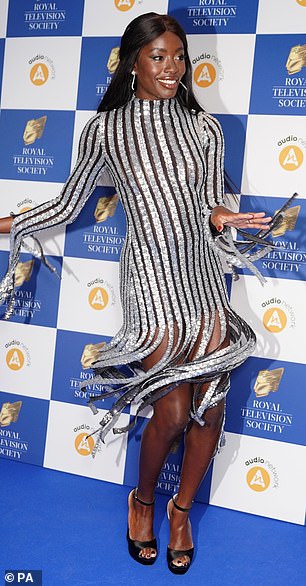 Keeley Hawes, 46, shimmered in a £2,500 metallic gown by The Vampire’s Wife and AJ Odudu was keen to show off her moves on the blue carpet in a glittering dress

Ethereal Kate Bush is a cold-eyed dead shot on the sly, it appears.

Teri Reed, recording engineer on her 1982 album The Dreaming, recalls: ‘I kept getting headaches and Kate thought it might be static electric build-up.

There was this thing then, a Zero-Stat Pistol that took the static charge out of vinyl records so they wouldn’t collect dust.

Kate thought it might help my headaches, so she came in with one.

Every now and then she would shoot me between the eyes with a positive charge of electricity.’ Reed hastens to add: ‘She was very caring.’

Even our ‘most handsome man’ unhappy with looks! 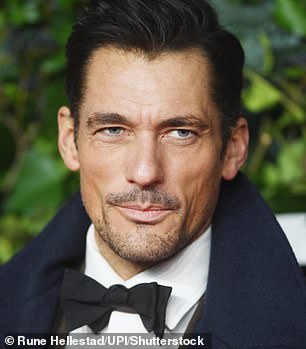 He’s often described as Britain’s most handsome man, but even David Gandy is unhappy with his looks

He’s often described as Britain’s most handsome man, but even David Gandy is unhappy with his looks.

The 42-year-old model, who set hearts aflutter when he starred in a Dolce & Gabbana advert wearing nothing but tight white pants, says: ‘The two things that scare me is that apparently your ears and nose carry on growing.

‘If that’s true, I am in massive amounts of trouble.’

Gandy, this country’s highest-paid male model, adds: ‘I’m not particularly happy with the way I’m looking at the moment. I’m not at my fighting weight, as I call it.’ Get over yourself!

Prime Suspect creator Lynda La Plante can’t stop weeping. ‘I cry watching films,’ the scriptwriter says. ‘I’m dreadful. You should never sit next to me if it’s a sad movie ’cause I’m off. I once went to a funeral, got the wrong funeral, and I was there in tears and I didn’t even know who the person was.’

Ballas: My love’s no toyboy

Strictly Come Dancing’s head judge, 61, has been going out with stage actor Daniel Taylor, 48, for three years and he doesn’t like it if she says he’s ‘pushing 50’.

Shirley adds: ‘He is the most remarkable man and is close to 50. He’s getting there, and keeps saying to me: ‘Don’t you go pushing my age up.’ ‘