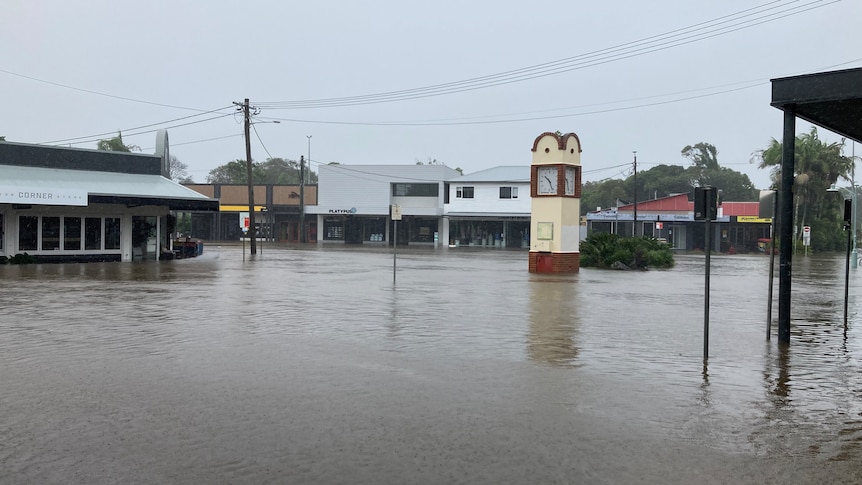 Byron Bay’s central business district has been under water for much of the day after what long-term locals say is the worst flash flooding they have ever seen.

About 300 millimetres of rain has been recorded in the Byron Bay district in the last 24 hours.

Most of it fell overnight in a relentless downpour and there was a metre of water through the CBD.

Floodwaters have receded over the course of the day, but earlier the town’s drainage system was unable to cope with the run-off and dozens of shops were inundated.

Dean Prosser said he had never seen so much rain during his 50 years in the town.

“The only time we’ve had anything like this was when a cyclone washed the surf club off the blocks, and that was 1973, I believe,” he said.

“We just had too much water fall out of the sky.”

Mr Prosser said the clean-up for the Byron Bay shops would be relatively easy compared to the clean-up Lismore faced earlier this month.

Lismore is flooding again as the Wilsons River rises.

“It’s a commercial issue, not a humanity or social issue,” Mr Prosser said.

In addition to the flooding, the area is also being battered by gale force winds.

The Bureau of Meteorology’s Dean Narramore said the storm came from a small but intense low-pressure system.

“We saw communities from Evans Head up to Byron Bay experiencing 200-300mm in just a few hours,” he said.

“Unfortunately, that caused significant and destructive flash flooding to the communities of Ballina and Byron Bay and many others in between.”

Local news direct to your inbox

ABC North Coast will deliver a wrap of the week’s news, stories and photos every Friday. Sign up to stay connected.