In 1949, Relaxacisor, Inc. introduced the world to the unfortunate future of fitness devices when it unleashed the Relaxacisor on an unsuspecting public. This fitness device, which resembled a travel-sized polygraph device or the prototype model of a James Bond villain’s torture kit, was concealed within a briefcase-like conveyance mechanism. However, rather than enabling evildoers to penetrate straight through to the deepest recesses of your brain by dialing up a mind probe, cranking up the Relaxacisor’s dials simply penetrated your midsection with electrical impulses for 30 minutes at a time, and all for the sake of unveiling a tightened set of core muscles in its aftermath.

In the pre-jogging era where individual agency in striving for a fitter physique was rare, and the most common method utilized by women to retain a slim, trim waistline was to smoke until the hunger pangs floated away, the Relaxacisor provided the lowest of the low-effort alternatives to exercise. I’d refer to it as a low-energy alternative, but plenty of energy was required in the form of electricity. To be specific, Relaxacisor estimated that the cost of a session with its machine — which affixed “beauty pads” to the midsections of its subjects and administered electrical impulses to the plugged-in region — was roughly five cents per use, or an estimated 60 cents per use in terms of modern money.

And yet, by every available indication, the Relaxacisor sold very well. Solicitations for dedicated salespeople — specifically young women — informed them that they could make at least $300 per month in income, with some ads suggesting their monthly commissions could reach heights of $1,500, or $17,500 in 2022 dollars. Moreover, these same ads claimed that the expected close rate was at least 60 percent, and over 400,000 Relaxacisor units would ultimately be sold by the time the product had reached the end of its lifespan.

Achieving revenues of $80 million on the sales of a fitness product principally geared toward women was no small feat in pre-1970s America. This sales surge was helped by a 1952 syndicated report from Associated Press journalist Hal Boyle, a Pulitzer Prize winner. Boyle visited the 5th Avenue salon owned by Louise Simonet, and watched as Simonet demonstrated the Relaxacisor on “a pretty blonde” named Charlotte Rakay. “This machine takes the place of your nerve centers and electronically flexes your muscles for you at the rate of 20 contractions a minute or 1,200 an hour,” Simonet told Boyle.

When Rakay explained repeatedly that the placement of the pads along her body resulted in sensations that were “Tingly… just tingly,” Boyle creepily expressed his feelings of regret that the Relaxacisor hadn’t also exercised her “adductor magnus and sartorius” — surreptitiously hinting that he would have liked it if the muscles of her inner thighs had been stimulated, too.

As quickly as Relaxacisors were being sold, a second-hand resale market sprouted up for them. These items appeared in thousands of personal ads promoting Relaxacisors that were “used once and then never used again,” or “rarely used.” Even in the anodyne text of personal ads, you get a palpable sense that their original owners felt as if they’d been had.

So was the Relaxacisor a scam?

To the best of the company’s knowledge at the time? Probably not. In fact, by modern fitness standards, the advertising of the Relaxacisor was shockingly honest. By the mid-1950s, the Relaxacisor’s advertisements specifically stated that the product would not help its users to lose weight. One ad took the further step of stating how the Relaxacisor was best used as an enhancement to a diet-based weight-loss plan, and the product even came with a free caloric intake guide.

The authentically dishonest elements to the Relaxacisor’s marketing pitch stem from its misguided promotion of spot reduction in size. Promotional materials suggested that individuals could reduce size without losing any weight because the electrical impulses would strengthen an undeveloped muscle, and therefore cause it to shrink in the process of being strengthened. The creation of additional muscle tissue may prop up certain areas and cause them to be framed more flatteringly, but you cannot simultaneously create new muscle and cause the body to shrink without also burning body fat, which is something the Relaxacisor couldn’t accomplish.

With these nebulous claims driving the Relaxacisor’s advertising campaign, its sales continued uninterrupted for a full 20 years until Relaxacisor, Inc. was eventually taken down by the Justice Department in April 1970. U.S. District Judge William F. Gray issued a permanent injunction against the distribution of the Relaxacisor in interstate commerce. His argument was that the Relaxacisor had trod into medical territory, but his statement delved into the realm of an exaggeration. “There is a wide spectrum of conditions under which the equipment can be hazardous,” ruled Gray, “such as intra-abdominal, gastrointestinal, orthopedic, muscular, neurological, vascular, dermatological, kidney, gynecological and pelvic disorders.”

The Food and Drug Administration placed the two final nails in the Relaxacisor’s coffin in January 1971 by first ruling that the machine could only be used under the supervision of a trained physician, and then by formally banning the resale of Relaxacisors, or the solicitation for second-hand purchasers of the devices in any newspapers.

Why then does it seem like I see plenty of electronic abdominal trainers being sold these days?

There were successors to the Relaxacisor that were introduced in the early 1980s and others that emerged in the 1990s. These include the Figuretron and the Rejuvatron, which both replicated the Relaxacisor’s fundamental process. They were put out to pasture when the FDA challenged their claims on similar grounds to those of the Relaxacisor. However, subsequent FDA rulings would lead to the resurrection of abdominal trainers that relied on electrical impulses once they wandered into a gray area of legality following some key medical advancements. Namely, by the 1990s, electrical muscle stimulators had established their verifiable prowess with respect to restoring some functionality to individuals suffering from paralysis, thereby adding credibility to all such machines.

In 1995, during the broader deregulation of fitness supplements and equipment, the FDA backed down somewhat from its dogged pursuit of electrical muscle stimulators, with the specific guidance stating, “FDA regulates exercise equipment only if the equipment is intended to be used for medical purposes, such as to redevelop muscles or restore motion to joints, or for use as an adjunct treatment for obesity.”

The guidance went on to state that exercise equipment intended only for physical conditioning or the development of athletic abilities in individuals who lack impairment is not subject to regulation. This decision afforded electrical muscle stimulators the capability of being sold openly as exercise devices with FDA approval as long as the companies selling them never claimed that their use would enable customers to shed body fat.

Do these things work to build strength and muscle at all?

Yes, but not particularly well. A 2005 study demonstrated that two months of consistent use with EMS devices resulted in significant abdominal strength gains for people who performed no prior strength training whatsoever. But a subsequent study showed that the same level of EMS use for three months on trained athletes resulted in zero improvements to their strength levels. This finding actually echoed the admission of a 1968 Relaxacisor advertisement, stating that regular use of the Relaxacisor could only improve muscles “to the extent these muscles lack tone because of insufficient exercise.”

In examining the legacy of the Relaxacisor, it’s difficult to discard it into the exact same pile as other fitness scams. The product did more or less what it claimed to do, which admittedly wasn’t all that much. The real problem was the cost. It was far too great to prove conscionable — its sticker shock every bit as jolting as the electrical shock it delivered to a user’s abs.

Ian Douglass is a volunteer firefighter, lackadaisical Concept2 rower and SkiErger and is the worst masters swimming All-American in recorded history. He also helps professional wrestlers publish their autobiographies, assists businesspeople with the writing of coherent thoughts and has overhyped degrees from Michigan and Northwestern. 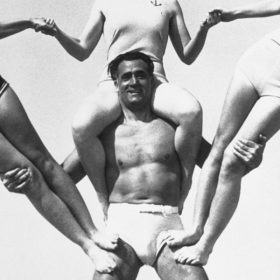