New Delhi: Smartwatches and fitness trackers market has grown by leaps and bounds in the past few years with features like SpO2 monitoring taking the centre stage, especially after the global COVID-19 pandemic. In fact, fitness trackers are also trying to squeeze in as many features as possible into the activity bands to appeal to the ever-burgeoning wearables consumers.

Xiaomi, one of the most popular smartphone makers, is a known name when it comes to making smartwatches and activity bands, and its sub-brand Redmi and Xiaomi itself have launched a decent line of wearables to date with the most interesting one being the Redmi Smart Band Pro. The Redmi Smart Band Pro is available in the country at a price point of Rs 3,999 but was initially available at an introductory price of Rs 3,499 too.

The Redmi Smart Band pro arrived in a fairly slim rectangular box with contents like a proprietary magnetic charger and some documentation. The inclusion of a magnetic charger at this price point is worth mentioning. The display is smaller than the Mi Band 6 — it is a 1.47 inch AMOLED screen that is wide and bright enough and gave enough real estate. The screen also has a peak brightness of up to 450 nits which ensured I could view the display properly under direct sunlight. The sheer size and quality of the AMOLED screen make it one of the best displays in a budget activity tracker segment. Thanks to the ambient sensor and automatic brightness, the screen automatically adjusted depending on the surrounding conditions such as direct sunlight and normal outdoor conditions.

The casing of the Redmi Smart Band Pro is made out of good quality plastic with a matte finish. At 25.5 grams, the Redmi Smart Band Pro is a charm to wear to bed, for long hours of workouts and exercises. The silicon straps can be detached easily and are good quality ones. The straps are made out of TPU (Thermoplastic Polyurethane) which is essentially a mix of plastic and rubber. The TPU straps were easy on my skin and did not cause any rashes or breakouts and depending on the size of one’s wrists, the straps can be adjusted from 130mm to 220mm sizes. I reviewed the black coloured one as that is the only variant available right now, but I expect Redmi to add more colour variants in the future.

The Redmi Smart Band Pro features a 200mAh battery which it claims can last up to 14 days. I used the band with features such as heart rate monitoring, stress tracking, SpO2 monitoring, menstrual cycle tracking, step count. Please note that stress tracking has to be turned on via the Xiaomi Wear app and it does affect the battery life. With all the mentioned features on, the battery lasted for almost a week which is commendable. With basic usage, the battery lasted the promised 14-day time. I would like to mention that the menstrual tracking feature is also there which was a bit of a miss. However, I am expecting this feature to get better with the upcoming iterations. Step count was almost accurate on the Redmi Smart Band Pro and one can also set a daily goal of steps on the band. However, it would have been better if the band also featured an in-built GPS. 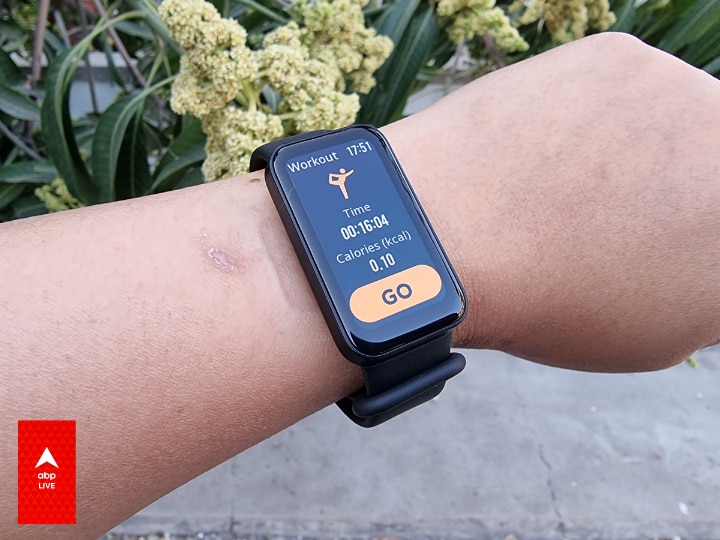 There is also an option to show other notifications and one will have to enable it via the Xiaomi Wear app. However, it can be a pain to enable the notifications for each app one by one as they have been enabled by default. In terms of activity tracking, the Redmi Smart Band Pro features more than 100 multi-sports modes and the most prominent ones are outdoor running, walking, trekking, treadmill, trail run, outdoor cycling, indoor cycling, pool swimming, freestyle, yoga and jump rope among others. The band also features 5 ATM water resistance, thus, making it suitable for swimming and water activities. Apart from the five built-in watch faces, the band also supports a range of watch faces that can be chosen via the app.

The Redmi Smart Band Pro can be paired with the Xiaomi Wear app and the Apple Health and Strava apps too. Much like what we have seen in the Apple Watch, the Redmi Band Pro also displays the number of times you stand, daily exercise minutes and calories burnt, thus, also motivating the user to keep moving at intervals. The Redmi Smart Band Pro is the best activity band available in the market right now that tries to give the feel of a smartwatch with its big display at this price point. The addition of menstrual tracking, 5 ATM water resistance and stress tracking make the deal even sweeter for those who are proactively looking to improve their overall health.