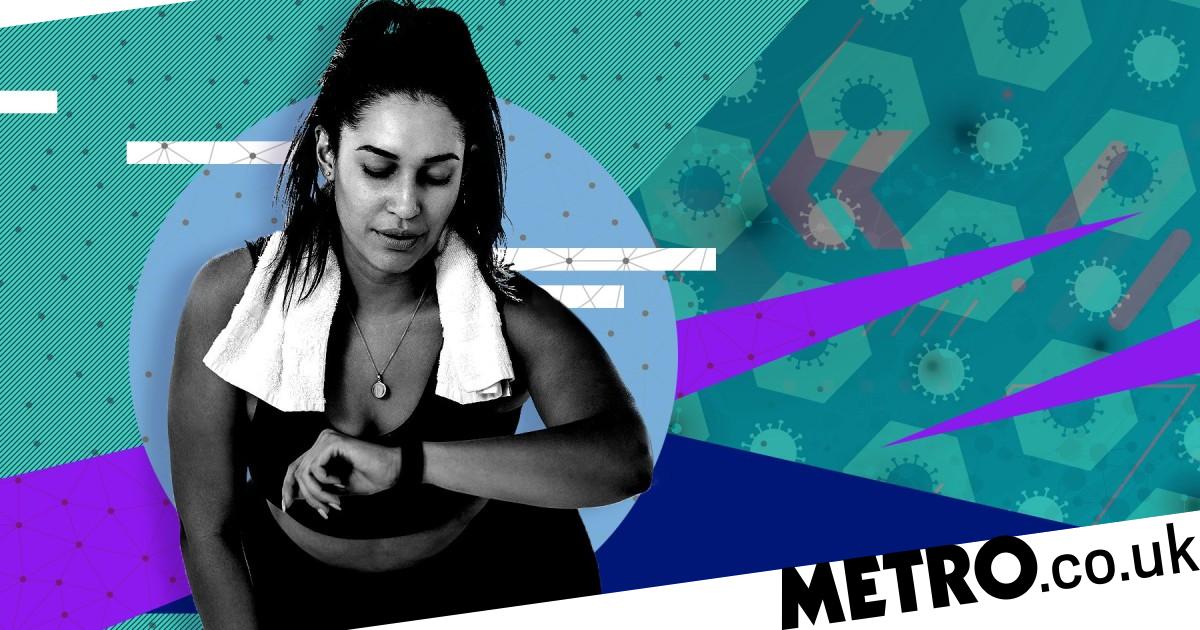 ‘When it first kicked in, if I did any exercise, it would just wipe me out.’

Clare Friel used to get up at half five every morning and go to the gym every day before she got Covid. But that all changed after she got ill.

‘If I did anything, it was almost like someone had switched my battery off,’ she tells Metro.co.uk.

Clare was used to working at ‘100 mph’, between running her own business and then using exercise as a release, but she is now only just starting to get back into exercise and fitness, months on from her second bout of Covid, and says she still has good days and bad days.

When Claire went back to one of her regular classes but the first one was tough: ‘I didn’t even make it through the warm-up,’ she says.

In the wake of her illness, Claire also developed a vitamin B12 deficiency, which she has to take injections for and she has been referred to the Long Covid clinic.

However, she was annoyed that one of the doctors very quickly – and, she says, without doing an assessment – tried to put her on anti-depressants. Clare has no problem with anti-depressants, but felt they would do nothing to address the underlying problems related to Long Covid, or help her fitness to return.

‘There’s hardly any support out there,’ she adds.

So, what is really causing the difficulties in terms of fitness and exercise in patients who have had Covid?

Studies have shown that more than half of people hospitalised with Covid have persistent impairments with their cardiovascular and lung function several months after discharge.

It’s still unclear how long it takes the body to recover once the virus is gone, and medical experts have been warning athletes and active individuals about the risks of Covid since early in the pandemic. The sobering reality seems to be that some simply won’t be able to return to their previous levels of fitness.

‘We know that people who have stays in hospital get deconditioned, they get muscle wastage,’ says Dr Caroline Dalton from the Advanced Wellbeing Research Centre at Sheffield Hallam University.

But, she says, the picture for Long Covid is more complex.

‘Classic rehab,’ Dr Dalton explains, assumes that people have muscle weakness and then rebuild that strength by doing some exercise every day, increasing incrementally until they are recovered.

‘It became very apparent, very quickly, that people who had Long Covid didn’t respond well to that,’ she says.

Instead, there were some similarities to conditions such as Myalgic Encephalomyelitis (M.E.): ‘The thing that is causing the weakness isn’t deconditioning,’ she says. ‘It is that the body cannot access energy due to issues with fundamental biological processes.’

This, Dr Dalton explains, is why people with Long Covid do not generally respond well to ‘classic rehab’.

‘They don’t have anything in the tank.’

One of the current theories being explored is that ‘micro clots’ are disrupting how the body is accessing energy and these are not being broken down through the body and flushed out properly.

However, Dr Dalton points out, Long Covid encompasses a wide range of conditions and symptoms. So, some people may not be affected by this energy access issue – and incremental exercise could still work for them.

For people who have effectively become ‘exercise intolerant’, the rehabilitation journey is even more complicated and still unclear.

One of the warning signs according to Dr Dalton is ‘post-exertional malaise’. This is where after some physical activity (even standing up for a long time) there is a delayed onset of symptoms – after 24-36 hours.

‘Patients who have described it say it’s like a combination of staying up all night because one of your kids is sick, mixed with jet lag, mixed with being about to come down with the flu,’ Dr Dalton says.

She says if people don’t recognise that this is what is happening, they can get into a cycle of ‘boom and bust’, thinking they’re having good days and bad days when actually there is an underlying problem – they are in fact pushing themselves into that ‘red zone’.

Dr Dalton suggests that for people in this cycle, things like stretching and floor-based yoga may be better than trying to get back into long walks or running, for example.

‘Don’t do things like set targets,’ she says, ‘go by an energy balance.’

For people with post-exertional malaise, Dr Dalton recommends getting more rest and making sure you have planned rest after any physical exertion. This helps to build a baseline of what you can do without experiencing symptoms.

She says this could mean ‘extreme resting’, and then gently seeing if you can do more without experiencing symptoms, and going back to the baseline if you do.

This process is not easy. Dr Dalton says it can feel ‘really boring and frustrating’, and many people will just not have the time to rest when they need to work or have caring responsibilities.

For a condition like pneumonia, it takes around a year for people to feel back to normal, she explains, so that kind of timescale might be worth keeping in mind for recovery from Covid.

‘It just took time. It took so much time’

Dan had been an everyday gym person before he contracted Covid in March 2020. He came down with a bad cough and fever he describes as, ‘the worst fever I ever had.’

The speed and strength of his symptoms were scary. He locked himself away from the rest of his family to protect them. But when the fever eventually broke, Dan was still struggling to breath and to move. Three months later, things had not really improved.

He could do basic daily tasks, but would feel fatigued and constantly needed to sleep and rest.

‘It wasn’t until around six months later that I started to get some energy to actually go out and get back to the gym,’ he says. ‘While I was in classes, it was good, but by the time I got home it all sunk in – the fatigue – and that would last all day.’

‘It just took time, it took so much time,’ Dan says.

Nuffield Health uses a twelve-week programme, explains Jon Taberner, a senior rehabilitation specialist. One part of that is virtual, one-to-one contact with rehab experts like Jon, with a focus on emotional wellbeing, coaching and tracking symptoms.

The patient is able to talk through any ongoing challenges, flare ups, and what is working or not working for them. Alongside that, are movement-based classes to help mobilise people. All of this is based on weekly assessments looking at if people can exercise, at what level, monitoring them for any symptoms and post-exertion malaise, and bringing in other healthcare professionals if needed.

‘When people are struggling to manage their fatigue we will try to stabilise how they feel day-by-day first,’ says Jon.

He says they use techniques such as pacing, planning and prioritising to reflect on their daily challenges, and to make sure there is enough time for rest. This is how they try to even out the ‘good days and bad days’ issue and sleep problems, break the cycle of fatigue, and give people the skills and awareness to manage their symptoms.

What you need to know about post-exertional malaise (PEM)

Post-exertional malaise (PEM) is the worsening of symptoms after physical or mental exertion – even very small amounts of exertion can trigger it.

Symptoms typically worsen 12-48 hours after activity and can last for days or even weeks.

According to the NHS, the fatigue experienced with PEM ‘feels very different to ordinary tiredness,’ and it is typically associated with ME and CFS.

A study of more than 200 Long Covid patients in January this year found that ‘PEM is a significant challenge for this patient group.’ The scientists say that because of the potential for ‘setbacks and deteriorated function’ following overexertion, PEM must be monitored and reported in clinical practice and in studies involving interventions for people with Long Covid.

Experts agree that PEM can be mitigated by pacing – which is a self-management strategy for activity. Pacing teaches patients how to adapt to what their bodies can handle while getting the most function possible under the circumstances.

‘Before I had Covid, I was really fit. I was the fittest I had ever been,’ says Helena, who was working as a nurse in the NHS in April 2020 she got sick.

‘I felt OK, not severe symptoms,’ she explains.

After two weeks she was back at work, but it was a stressful time and there was a lot of pressure on staff.

Then the symptoms started to return. She had sudden temperatures, a sore throat and periods of exhaustion. She moved in with her parents and within a few weeks felt able to start running again. But the exhaustion, sore throat and temperatures returned again – her doctor signed her off work with post-viral fatigue.

Helena was still doing walks for exercise, but anything more than 10,000 steps would exhaust her for days. It took six months before she was able to start running again, but a second bout of Covid over Christmas ‘floored’ her.

Helena was eventually referred to a Long Covid clinic. Now, she is still doing some swimming and took up moderate cycling, but is scared to even try running again.

‘It’s just weird how I was so fit and healthy, and loved being active, loved getting up early in the morning, I used to take my running stuff on holiday,’ she says. ‘Now I have had to change my mindset of what is a normal amount of activity for me now.’

There is still a huge amount we have to learn about Long Covid, but the evidence suggests it’s important to look for the patterns in symptoms such as fatigue and breathlessness, particularly for signs of post-exertional malaise.

It’s frustrating to feel as though you can’t get back to your pre-Covid fitness, but listening to your body will give you the very best chance of recovery.

It is also important to remember that the guidance about getting back into exercise after recovering from Covid shouldn’t be followed if you have been diagnosed or suspect Long Covid. Exercising through lingering symptoms can make you worse and set you back in the long run.

Get in touch by emailing MetroLifestyleTeam@Metro.co.uk.


MORE : How to cope with the end of Covid restrictions if you don’t feel ready


MORE : How long do you test positive for Covid after having it?