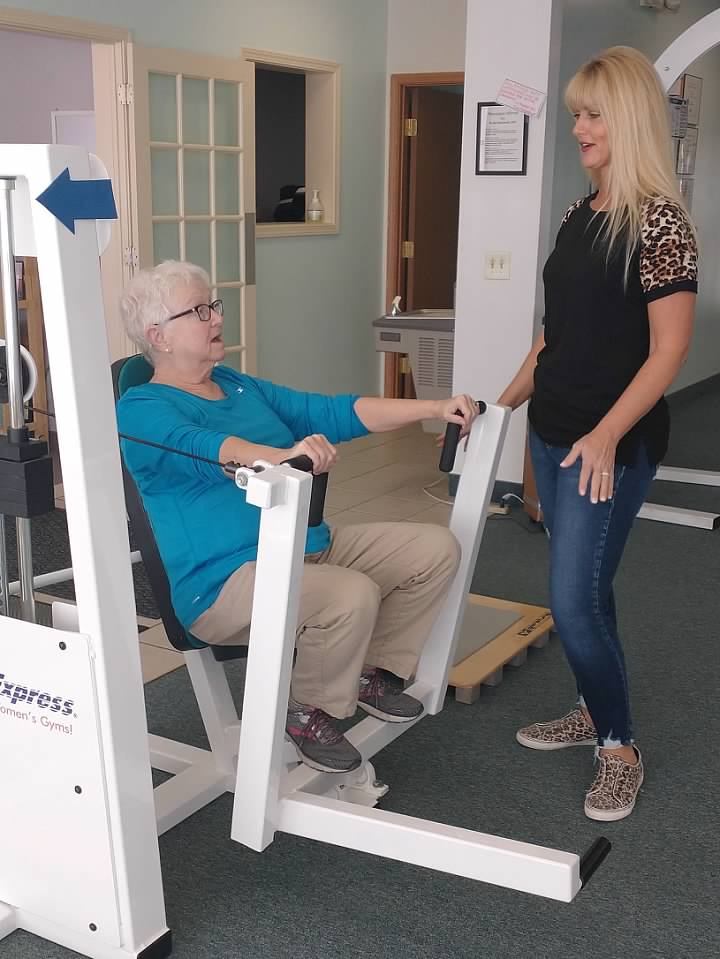 Like many businesses affected by the pandemic, Contours Fitness Center in Mentor has had to make adjustments.

Fortunately, those changes have turned out to be favorable.

Prior to the state-mandated shutdown of businesses in 2020 a once robust roster of nearly 500 members at the all-ladies facility diminished by about 40 percent. Due to the lower numbers and loss of revenue owner Monica Tatterson recently stated that she had no choice but to announce that the gym would be closing in June.

Loyal members who’ve been exercising as well as socializing there for years were shocked and saddened
by the news.

Urged by the group to somehow remain open, Tatterson worked out a downsizing strategy.

The fitness center, which initially occupied an area about two-thirds of its current space when opening 16 years ago, is now planned to cut back to its original, smaller size, resulting in more affordable operating costs for Tatterson.

She had expanded the gym some years ago when a growing membership generated the need for additional room.

Those who were disappointed upon hearing of the imminent closure are pleased that the transition will take place. Among them is longtime member and Mentor resident Pat Mazzolini.

“I really enjoy coming here. I was concerned about Monica and my workout future. I’m glad now that it’s resolved,” she said, adding that, “It was tough during COVID. I missed it. My body missed it. I tried to exercise at home but didn’t get as good of a workout.”

Although open to women of all ages, membership is mainly comprised of those 60 and older. Costs are often covered by insurance benefits, including Silver Sneakers, Renew Active, Optum Fitness, Silver & Fit and Active & Fit.

Many members claim that they enjoy the only all-ladies gym in Lake County because of a pleasant atmosphere that promotes exercising at an individualized pace among the company of those in similar peer groups.

Josie Lahr is a staff member and experienced fitness specialist who teaches some of the several classes offered at Contours. She credits part of the gym’s popularity to the all-women component and “non-threatening” environment.

“The ladies just love this place,” she said, adding that many past members whom she’s called about rejoining have been appreciative and receptive.

Exercise machines, free weights and various classes including Pound, Zumba, Chair Yoga and more are available to assist with improving and maintaining good health. Classes are open to members for $5 as well as non-members for $7.

Personal trainer Jillian Cole is on hand for those seeking one-on-one fitness sessions. Although some members have been slow to return to the gym, her clientele hasn’t shown hesitation.

“As soon as the doors opened, within months, I had almost everyone back,” she said.

Tatterson, whose husband Jason is pastor of Freedom Assembly of God Church in Mentor, first started a Contours operation in Eastlake before opening the Mentor facility.

An overloaded work schedule convinced her that closing the Eastlake business would allow her more time to to concentrate on the single gym in Mentor along with her responsibilities as the church’s youth pastor.

The business owner noted that challenges resulting from the original onset of the coronavirus in 2020 grew more formidable over time.

“People were slowly trickling back when the second wave hit over the holidays in 2021,” she said.

The long stretch of time during which people stayed away in fear of contracting the illness prompted some to fall out of the exercise habit or to develop different workout routines.

The loss of membership and its adverse consequences have been difficult for Tatterson, but her optimism remains high.

Contours Express for Women is at 6966 Heisley Road in Mentor.