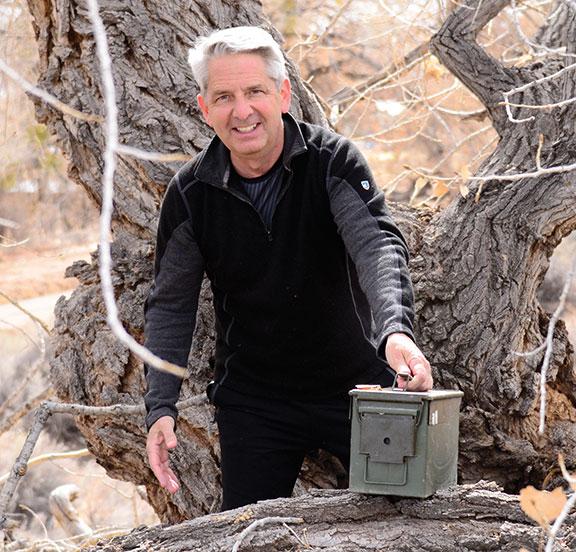 Rio Rancho resident and Realtor Mark Ryerson shows a typical geocache treasure box, which once had a military use. Gary Herron / Observer

Chances are pretty good you’ve heard of geocaching, defined as “the recreational activity of hunting for and finding a hidden object by means of GPS coordinates posted on a website.”

Suffice it to say, it’s a good way to exercise your body and your mind while having fun.

It’s often referred to as the world’s greatest treasure hunt, and you won’t hear an argument about that from Rio Rancho resident and Realtor Mark Ryerson.

Ryerson said he stumbled onto geocaching in 2000; he’s literally stumbled multiple times while out hunting for these “treasures,” and it’s become a weekly activity for him.

It’s not an expensive hobby — the handheld geocaching GPS tools cost from $100-$300 — and it can almost be addictive.

Those GPS tools can also be handy for hikers, who can input where they park their vehicle before going out somewhere new and thus avoid getting lost by zeroing in on their vehicle later.

‘The fun of the hunt’ 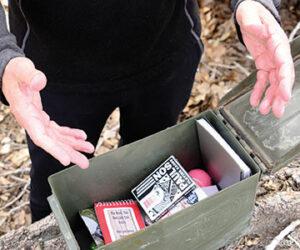 There’s nothing valuable in this geocaching find, but it’s not necessarily the value of typical “treasures” found. It’s the thrill of the hunt. Gary Herron / Observer

“It’s all about the fun of the hunt,” says Ryerson, listing four “positives” about geocaching:

Pertaining to the latter item, Ryerson estimated he has met between 50 and 100 people in this hobby, and once organized a fundraising geocache hunt for adult literacy nonprofit ReadWest, burying about 20 items. He said he’d seen people from France geocaching while in the area for the balloon fiesta.

He estimated there are about 1.4 million unique spots, attainable via the cellphone app, and “within 10 miles of Rio Rancho, there’s a couple thousand.”

To demonstrate, Ryerson led a curious reporter out to Trailhead Park, not far from his home in River’s Edge I, to find an item he’d hidden.

That’s another part of it: The joy of hiding something and later discovering who found it. Ryerson, like others before him, leaves a logbook within the “treasure box” for finders to record when they found it and where they’re from.

One such hunt took him to a park in River’s Edge II, where he was at his wit’s end trying to find a cache somewhere on a large piece of grassland. He admitted he contacted the person who stashed it there and found out it was within a fake sprinkler head, with a log attached.

He was with his wife, Susan, who was an executive for ReadWest, and happened to engage in a random conversation — and he was intrigued.

Although Susan isn’t as hooked on the thrill of the hunt, Ryerson said it seems every time they’re out hiking and he decides, “Let’s see if anything is cached near us, she’ll find it before I do.”

Geocache seekers, who can also use an app on their cellphone, can then determine if any such treasures are around them — near their home, near a neighbor, while vacationing in other states or countries, etc.

Hunters can get plenty of steps in toward cardio goals, obtain Vitamin D from the sun, see sites off the beaten path and easily converse with their spouses, kids and/or friends along the way.

One of the most-memorable geocaching hunts that Ryerson participated in was helping “Professor Penguin” get from Albuquerque to Seattle. Once there, he perched the toy animal atop Susan’s shoulders and had the state’s capitol building in the background.

Some school children started that hunt. The students closely followed the log that accompanied the stuffed animal, tracking its progress around the country — learning quite a bit about history, geography and more along its route.

Ryerson’s funniest search came one day when he was on a hunt on the mesa near Rio Rancho; it was a clothes basket that had been buried, and while opening it, he sat on a cactus.

Happily, he recalled, a pair of needle-nose pliers was in that basket, which helped extract the painful needles.

To learn a lot more about this hobby, visit geocaching.com or simply Google “geocaching” for resources, ideas, tools and more.